There is only one submersible in the world that on any given day can dive, taking its pilot and one other person, to the deepest parts of the ocean. To reach the bottom of the Challenger Deep, Caladan Oceanic’s Deep Submergence Vehicle (DSV) Limiting Factor, descends through the water column for four hours. By the tenth minute of the 11 km journey the sub is in the blackest possible darkness, where sunlight cannot reach. Neutrally buoyant when it reaches full ocean depth, the sub hovers just above the seafloor. The pilot turns on the sub’s lights and 10 thrusters, and travels along the bottom, making about two knots – exploring, taking scientific measurements and sampling for several hours before dropping its steel ballast and starting the three-hour ascent.

Deeper than Mount Everest is high by about two kilometers, the Challenger Deep, which is the bottommost point of the Mariana Trench, has been nearly unvisitable by people until 2019. Only on two previous occasions had this depth been observed by the human eye: the first in 1960, from the bathyscaphe Trieste, the second in 2012, from the submersible Deepsea Challenger. Despite these and other unmanned efforts, the Challenger Deep’s precise depth has remained uncertain until recently.

The record-setting exploration and scientific expeditions began in 2018, when the Caladan Oceanic team of researchers, engineers, sub specialists and explorers set out on the Five Deeps Expedition, successfully making Victor Vescovo, Expedition Creator, Sponsor and Sub Pilot at Caladan Oceanic, the first person to reach the deepest point in all five ocean basins. The Limiting Factor and accompanying subsea equipment, designed, built and tested by Triton Submarines, enabled Vescovo to dive to the bottom of the Challenger Deep three times during that expedition.

To measure their dive depths in situ, the team mounted a CTD to the sub. Macdonald explains that the uncertainty in their measurement is proportional to the depth, so at nearly 11 km depth, the team’s measurement could be off by as much as about 11 m.

In order to reduce that error, the team decided when they returned to the Mariana Trench in 2020 to do two things. They would use the highest precision instruments they could get. They would also increase the number of instruments they deployed to the deepest point of the Challenger Deep, which improves the overall magnitude of the measurement error.

With three RBRsolo³ D|deep pressure loggers mounted alternately to the sub or one of three landers (automated underwater vehicles that carry instruments to the deep and support sub operations), the 2020 Ring of Fire Expedition made several dozen lander deployments and a handful of sub dives to collect data, including depth measurements, at the Challenger Deep.

Caladan Oceanic’s objectives began in the tradition of record-setting exploration, and evolved quickly into science-driven expeditions, producing fundamental information about our planet. Vescovo comments on the scientific value the Five Deeps and Ring of Fire expeditions have produced: “Over the past two years, we have been able to not only personally explore the absolute deepest points in all five oceans – for the first time, but also map over one million square kilometers of new area with a level of precision never achieved before.” He says that as a result, Caladan Oceanic is working with the International Hydrographic Organization to name over 130 seafloor features they discovered. 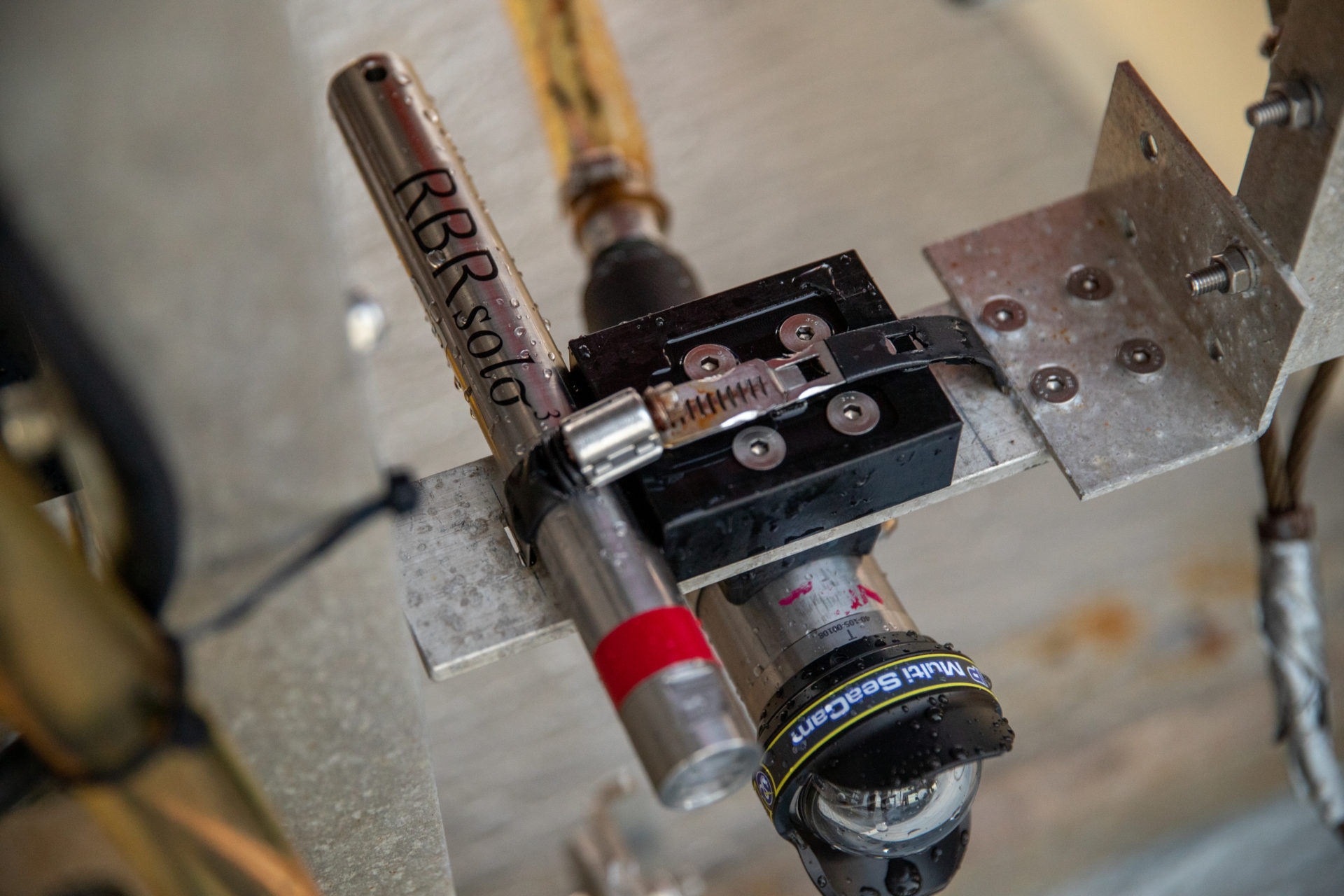 The collection of these huge quantities of mapping data began during the Five Deeps Expedition, when locating the deepest point in each ocean basin. The first step was for Heather Stewart, the Expedition Geologist, to analyze satellite-based seafloor maps, looking to the ocean’s trenches. Trenches are the site of subduction zones, where tectonic plates are colliding and the colder, denser plate is being thrust under the overriding plate. Stewart says, “As the plate is being bent and pushed underneath it creates this accommodation space on the seafloor, so that’s where you get these little slivers of really ultradeep water.”

Stewart identified the possible candidates for deepest trenches, but the resolution of the satellite maps makes it impossible to ‘zoom in’ on specific points of the seafloor. This granular data has a horizontal accuracy of 500 to 1,000 m – 1 data point every 500 m – and with a depth uncertainty ranging from 10 to 1,000 m. Sonar measurements from their ship, the Deep Submersible Support Vessel (DSSV) Pressure Drop, were needed to rule out some trenches and pinpoint the deepest points.

Beginning in Fall of 2018, Cassie Bongiovanni, Director of Mapping Operations for Caladan Oceanic, created detailed sonar maps as the Pressure Drop ran transects over the trenches. During the Five Deeps Expedition, Bongiovanni mapped over 650,000 square kilometers of seafloor. And Caladan Oceanic has donated that data to Seabed 2030, a global project aiming to map the entire seafloor by 2030. At Challenger Deep, Bongiovanni, who purposely knew little about the Mariana Trench so her sonar analysis would be unbiased, identified two potential areas of greatest depth. They had reached the limits of the uncertainty in the sonar data: only an in-situ measurement would tell them accurately the location of greatest depth and its precise depth.

The expedition located the world’s deepest point in the eastern of the Challenger Deep’s three pools, and they discovered that the seafloor was, as Macdonald puts it, “quite dynamic.” In a dive to the Challenger Deep, the sub may encounter the flat silty brown bottoms of the pools, rock fields, and more. Macdonald says, “It goes from a sediment basin with gradual slopes to these big rocky outcrops with 10 m high walls. It gets quite dramatic when you’re trying to fly a sub through it.”

As to why the Mariana is the deepest ocean trench in the world, Patty Fryer, Marine Geologist at the University of Hawai’i and an expert on the Mariana Trench who took part in the Five Deeps Expedition, says is due to a confluence of geological processes. Principally, the Pacific Plate at the Mariana Trench is the oldest oceanic crust in the world; it is 170 million years old. With age, ocean crust cools and becomes denser, causing it to sink. A second reason is due to a tear in the subducting plate. First described in 2003 by a team led by Fryer, this tear is causing the part of the subducting plate at the Challenger Deep to be thrust more steeply downward under the adjacent Philippine Plate. A final reason has to do with the trench’s crescent moon shape. Fryer explains that to the north and south of the trench, “large, thick pieces of crust crashed into the subduction zone, putting a pin in each side.” The south end of the trench has more give; as the plates move, the crust is stretching and opening like a fan, with the veins of the fan separating from one another. She says, “the earth’s crust thins and is deeper between the veins of the fan”. The Challenger Deep lies between these veins. Also, she explains that the Challenger Deep would be deeper if it were not slowly filling in due to erosion from the overriding Philippine tectonic plate.

In 2020, when the team was back at the Mariana Trench and the Challenger Deep, it was as part of the Ring of Fire Expedition. The expedition mapped the northern arc of Pacific Ocean, from the Mariana Trench to Alaska, an active tectonic plate boundary region. This time, arriving at Challenger Deep, they were equipped with a plethora of oceanographic instruments, including the multiple pressure loggers, and a plan to explore areas of interest identified from the previous year’s dives.

Vescovo reports that the RBRsolo³ D|deep pressure loggers have supported Caladan Oceanic’s 2020 record-setting depth measurements by allowing them “to take down up to six independent depth sensors to the deepest point in the world, where the devices are subjected to 16,000 pounds per square inch of pressure and freezing temperatures. On our last series of dives, we therefore had three times the number of independent depth sensors on our sub than any previous submersible or autonomous vehicle. This allowed us to not just map, but survey, the Challenger Deep to a level of precision never possible before. More sensors mean less error in measurement, and with the data from the critical RBR sensors, we have been able to finally determine with the greatest precision in history the age-old question: “How deep is the ocean?””