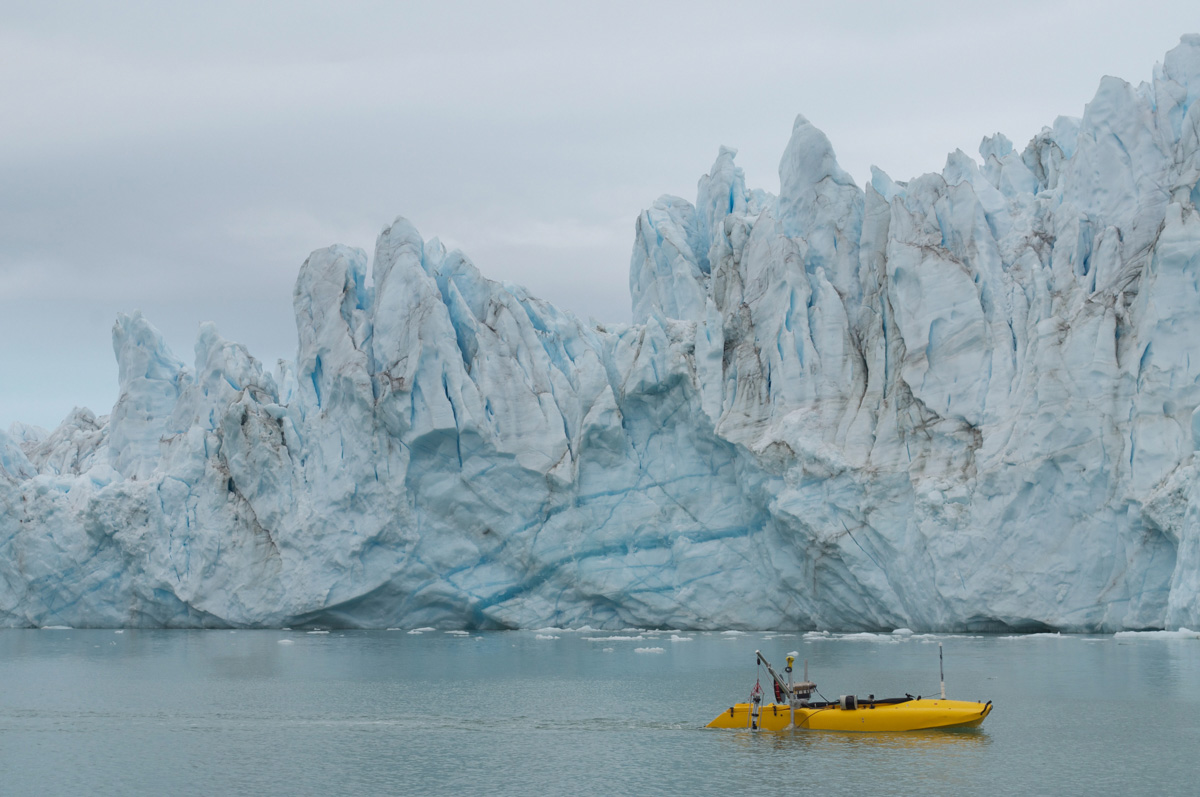 Sometimes high potential comes with high risk. Working beside a glacier that might calve without warning definitely qualifies as one of those situations. For scientists investigating submarine melting of Greenland’s ice sheet, sampling close to where the ice meets the water offers the greatest potential insight. Unfortunately, it also offers some of the greatest personal danger.

The team needed an affordable, safe solution for gathering data right up to the ice face. “Sarqardleq wasn’t one of these giant, very dangerous, active fjords,” Clark recalls. Still, he calculated that Sarqarliup Sermia glacier (estimated to be about 200 metres thick at the terminus) calved about three to five times each hour – just long enough for someone to be lulled into a false sense of security.

‘It’s enough for you to be out there for half an hour and think you’re safe, and then a giant piece of ice will fall on you,’Clark Richards

“It’s enough for you to be out there for half an hour and think you’re safe, and then a giant piece of ice will fall on you,” Clark laughs. In all seriousness though, he says, “you really can’t get close to the ice face with people, which means you need some way of getting instruments out there.”

The engineers at WHOI found an unusual solution: a commercially-available kayak with a built-in jetski engine. Although originally designed for fisherman to travel upstream and reach shallow areas, Clark describes how the WHOI engineers saw it and said, “We could turn that into a robot.” They called it a Jetyak.

Where a person would normally sit, the engineers installed “the brains” of the robot—including servo-driven controls, an Ardupilot autopilot for autonomous operation, and radios for wireless operation and communication. After arriving in Greenland, the robotic watercraft was outfitted with an acoustic Doppler current profiler (ACDP), a multi-beam echo-sounder, a laser measuring system, and an RBRconcerto CTD. The ACDP measured ocean currents from the surface to the seabed and the multi-beam echo-sounder collected data needed to create a 3-D map of the sub-surface face of the glacier. At the same time, the RBRconcerto CTD collected measurements of conductivity, temperature, and pressure (depth) – data that is used to determine how fresh (or how saline) the water is. Since much of Dr. Straneo’s research involves ice-ocean interaction, being able to obtain these measurements right up to the ice face was essential for understanding how different ocean dynamics contribute to the destabilization of Greenland’s glaciers.

‘You think of Greenland as having a certain amount of ice. It loses ice because of flow into the ocean and melting, but it also gains some ice because of snow. That trend took a nosedive in the late nineties.’Clark Richards

Clark explains, “You think of Greenland as having a certain amount of ice. It loses ice because of flow into the ocean and melting, but it also gains some ice because of snow. That trend took a nosedive in the late nineties.” In fact, according to a recent review in Nature published by Dr. Fiamma Straneo and Dr. Patrick Heimbach, the mass loss of Greenland’s ice sheet quadrupled from 1992-2001 to 2002-2011.1

Although the mechanisms behind the acceleration are not well-understood, global climate change has emerged as an important context. Not only do higher atmospheric temperatures increase the likelihood of surface melt on the ice sheet, they also raise ocean temperatures – which could mean more submarine melting.

One way that oceanic heat is transferred to these marine-terminating outlet glaciers is through subglacial plumes. When meltwater from the ice sheet flows into the ocean, it emerges from the bottom of the glacier, and the resulting subglacial flow has a lower density than the surrounding saltwater. As a result, it tries to bubble out from under the ice and up to the surface. Although oceanographers have long-suspected these rising, turbulent plumes to be important in controlling water circulation near glaciers, it is very difficult to get measurements of them – because being that close is so dangerous. 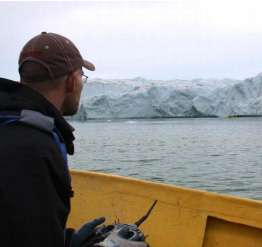 “The main point of this fieldwork was to get those kind of measurements right up close to the ice sheet—within the plume if possible,” Clark says.

Using the Jetyak, such measurements became feasible. With the CTD fastened to a small winch, the research team manoeuvred the Jetyak around the fjord and took samples in high risk areas. According to Clark, using an RBRconcerto CTD was almost a no-brainer because of its small size and ruggedness in icy conditions. “If you weren’t going to use an RBR product, you’d have sacrifice either accuracy, durability, or convenience.”

While Clark is in the process of co-writing a paper on subglacial plumes coming out of the research from that expedition in summer 2013, his experience with the Jetyak and what he calls “the vehicle side of oceanographic sampling” has left him excited for how future technological developments will make collecting better data more affordable.

“To take a proper government research vessel to sea can be $50,000 a day, so if you can build something that costs you $50,000 or less and outfit it with sensors and then use it for a year, it’s way more economical to do that.” The Jetyak’s replacement cost is just $15,000. Developments in Autonomous Surface Vehicles (ASVs) are especially promising for conducting research in Greenland. More data can be collected without the risk of injury since even less human input is needed.

“There has been a big shift towards that in recent years,” Clark observes, “and I think the technology is still developing.”

Related: Find out more about the rugged RBRconcerto CTDs used in this project.