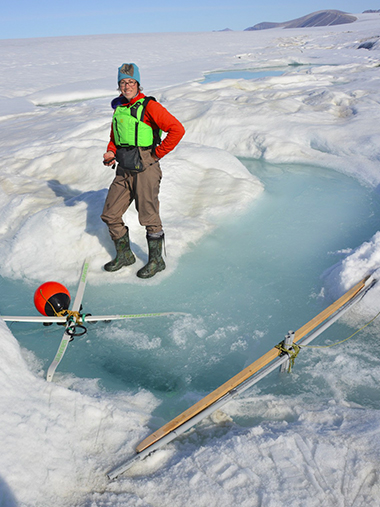 In Canada’s High Arctic, within the fiords of Ellesmere Island, there are lakes that float upon the Arctic Ocean. Called epishelf lakes, they are glacially-fed bodies of freshwater that sit atop a steep halocline. The lakes exist only where the ice shelves, filling the mouths of the fiords, act as dams, holding the water from flowing into the ocean.

In 2002, Geographer Derek Mueller, who studies Ellesmere Island’s ice shelves, and epishelf lakes, recognized that since the previous field season, something about the Ward Hunt Ice Shelf had changed. Curious, he took a CTD profile of its 30 m deep epishelf lake. As Mueller recounts, “The lake had drained out completely and the halocline had risen up to the top of the water column. It looked more or less like a regular Arctic fiord.” During that field trip, he discovered that the ice shelf had fractured and the epishelf lake had drained by the crack.

The ice shelves of Ellesmere Island are disintegrating. They often break up in calving events that produce tabular pieces of ice tens of square kilometers in size, called ice islands. Using in situ and remote sensing measurements, Mueller, Associate Professor at Carleton University in Ottawa, is capturing the seasonal and multi-year changes to the ice shelves and the ecosystems they support, and he is tracking and investigating the disintegration of the ice islands they produce.

Mueller began his research career studying the extremophile communities of microbes inhabiting meltwater lakes that form on the surface of Ellesmere Island’s ice shelves. One aspect of particular interest for him was the anomalous feature of the meltwater lakes being saline.

Most meltwater lakes are made of fresh glacial run-off, Mueller explains. By contrast, some areas of Ellesmere’s ice shelves have surface exposures of ice formed through basal accretion of seawater. Mueller realized these lakes must go through large annual salinity changes: “As the freezing front comes down, it’s rejecting solutes and they’re concentrating in the bottom. That’s going to boost up the conductivity.”

To test his hypothesis, he planned to overwinter a CTD in a meltwater lake on the Ward Hunt Ice Shelf. Critical to this work was instrument reliability, since his mooring would be isolated for many months. Mueller used RBR thermistor strings in his past work in Antarctica, and knew the company made instruments equipped for extreme environments. “My Ph.D. supervisor Warwick Vincent called up Frank [Johnson, RBR’s then president],” Mueller recalls, “and asked him what would happen if we froze one of their conductivity sensors. He said, I don’t know. I’ll throw it in the freezer and find out and get back to you. It passed the test. So we bought one and it worked beautifully for that purpose. We left it in over winter and it froze and you could see the spike in conductivity.”

In 2003, Mueller and co-authors published in Geophysical Research Letters their observations of the Ward Hunt Ice Shelf’s break-up. The Arctic’s largest ice shelf had fractured and its associated epishelf lake had disappeared. In step with the changes he was witnessing in the ice shelves, Mueller’s research focus changed: from ice shelf ecology into environmental change detection.

To record the break up of the Ward Hunt Ice Shelf, the team had used satellite-borne synthetic aperture radar, helicopter overflight transects and in situ CTD profiles. Over the period 2000 to 2002, the ice shelf broke in two, and calved 6 square kilometers of ice shelf and 20 square kilometers of multi-year landfast ice.

‘These are single events that have profound implications for the environment.’Derek Mueller

In his career, Mueller has seen 500 square kilometers of ice released from the Canadian ice shelves into the Arctic Ocean. He stresses that the break-up progresses discontinuously and on a large scale. “These are single events that have profound implications for the environment.”

In a 2009 paper in Limnology and Oceanography, Mueller and colleagues used the concept that events lead to regime shifts to propose that climate change can be seen not as a linear function, but instead as a step-wise function. The paper explains, “Another method for describing change in climate over time is to evaluate where a significant shift in the mean of a given variable occurs over a complete data series. These shifts indicate the timing and severity of a rapid switch between stable states or regimes.”

The researchers were working with four decades of CTD data from five Ellesmere Island lakes, with profiles since 2001 collected for this study using their RBR instrument. They saw in the data an initial period of warmth, followed by cooling, and then finally a period of warming. “When you do a regression line across that you get no result – it’s not a significant change at all. But that’s not what we were seeing in the field.”

The study found the vertical structure of temperature and salinity changed subsequent to an air temperature increase that caused perennial ice cover to melt, allowing wind-driven mixing. “These regime shifts are compelling sentinels of climate warming that are easy to detect and causally unambiguous.”

The striking consequence of the disintegration of the ice shelves is the production of ice islands. Mueller wondered, “Where are they drifting and where are they breaking up?”

His team put beacons on the ice islands and used Radarsat imagery to track them. “The ice islands from the Ellesmere ice shelves have dispersed west toward the Beaufort Sea, while those from the Petermann Glacier headed down the coast of Ellesmere Island, Baffin Island, and Labrador.” Tracking ice islands traveling south along the east coast of Canada and understanding how they disintegrate are an applied part of Mueller’s research: the ice islands may contribute to hazardous ice conditions where there is shipping and infrastructure. An oil platform wouldn’t be able to avoid such a looming mass. Ice islands in and of themselves are not of direct concern to vessels, Mueller explains, because they are large enough to be easily seen. However, as they disintegrate, ice islands produce pieces that are smaller than icebergs, called growlers, which are difficult to spot because their sail, the portion above the waterline, is small. In a collision, a growler of solid ice can damage a ship’s hull. 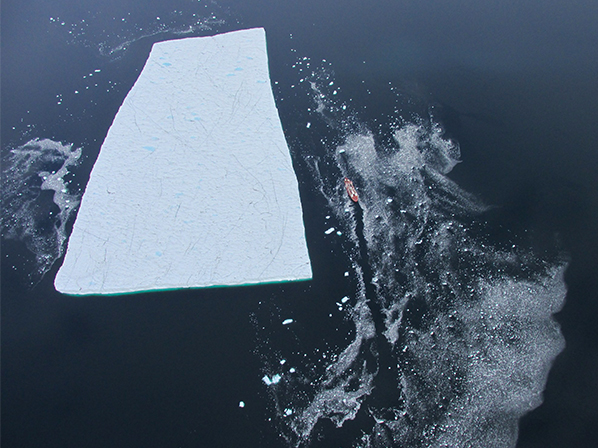 An ice island, which likely broke away from Greenland’s Petermann Glacier, and the CCGS Amundsen research icebreaker, viewed from a helicopter in August 2014.
Mueller’s team has mapped the top of ice islands by stitching together many photos taken from a helicopter as well as with LiDAR data, and they have mapped their underside using sonar from an AUV.
Photo credit: Jean-Éric Tremblay and Guillaume Carpentier.

To understand how ice islands disintegrate, Mueller and his team are mapping their structure. They mapped the underside of an ice island using an AUV, and are measuring the rate of thinning using a radar system installed on its surface. “They’re melting from top and bottom, and we’re studying that, but they’re also fragmenting all around.”  Last spring they flew transects over an ice island in a helicopter, taking photos at one Hertz. “We can stitch those photos together using software and reconstruct their shape in three dimensions. We can know their shape to 4% precision, which is pretty good.” A postdoctoral fellow in the group is building a computer model and applying physical forces, such as bending stresses, to study how and when the ice islands may break.

Ellesmere Island still possesses numerous ice shelves, which Mueller is monitoring; ones that will some day fracture and calve ice islands. Much of the data he uses comes from satellites, but Mueller and collaborators Bernard Laval and Andrew Hamilton from the University of British Columbia, are monitoring in situ one of few remaining epishelf lakes. On the landward side of the Milne Ice Shelf they have a mooring. “The mooring that we have in Milne Fiord, we’ve serviced that since May, 2011. It’s the longest running mooring in a fiord in Arctic Canada, as far as I know. It’s quite a unique place where further changes are poised to happen anytime soon.”

The mooring, he says, is “ice-tethered. It hangs from perennial lake ice in the back of the fiord and then under the lake ice is a layer of freshwater, something like eight meters thick. And then directly under that is full seawater.” Attached to the mooring are an XR-420 CT, an XR-620 CTD (now called the RBRduo and RBRconcerto) and about a dozen RBRsolo Ts.

Mueller and his group are still using the RBR CTD his Ph.D. supervisor purchased over fifteen years ago. “We’ve used the RBR CTD for profiles for years. It was the first one I ever laid hands on.”  The only change is that these days it, and Mueller’s other RBR instruments, are serviced at RBR’s new testing and calibration lab, and instead of by Frank Johnson, it’s Johnson’s son, Greg, leading RBR’s expanding team.

‘…We want to have a little crew of some old and some new, so that we can make sure there’s good overlap to keep protocols consistent.’Derek Mueller

It’s critical for Mueller and his team to make trips to the High Arctic each year: to conduct field studies, to service multi-year moorings, and to maintain the integrity of the line of researchers, which Mueller deems equally as important as the integrity of the data itself.  “My job, in many respects, is to train the next generation of scientists. So that’s something that I enjoy doing and it means that we bring constantly new people up and they’re being trained by us. We want to have a little crew of some old and some new, so that we can make sure there’s good overlap to keep protocols consistent.”

During these first months of 2017, Canadian research network ArcticNet, which gave Mueller and many other researchers access to the Arctic by use of the CCGS Amundsen icebreaker, is winding down. Mueller has fewer options for getting up north, and so his part in the record of this transitional time may be left incomplete.