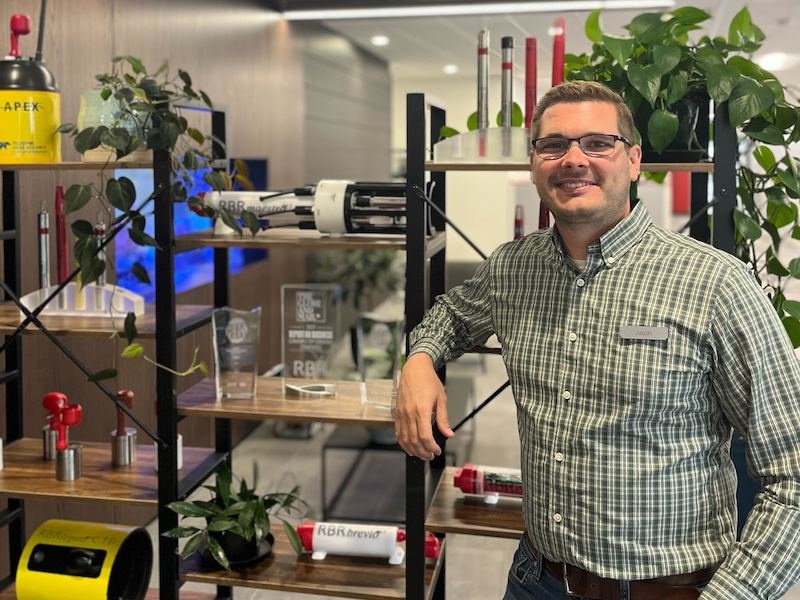 If you spend any time at the shipping counter at RBR, you’ll quickly get a sense of the variety of instruments and sensors that we ship every day. From temperature and pressure instruments, to tide and wave loggers, to a seemingly endless variety of CTDs outfitted with biogeochemical sensors, some days it seems like no two shipments are alike. However, no matter the instrument or the configuration, they are all managed with a single software package, Ruskin.

The RBR software team is growing fast these days and they seem busier than ever. We sat down with Software Manager, Jason Laronde, to get an inside look at the RBR Ruskin software, the team that maintains it, and where we are headed in future development.

RBR: Could you please introduce yourself and tell us a little bit about your role here at RBR?

Jason: Okay. My name is Jason Laronde. I’m the software manager here at RBR and I oversee the desktop software team, which develops and maintains the Ruskin software. I also manage the embedded firmware team. My history at RBR is pretty long. I started out as a junior developer in the software team in 2008, moved my way up to team lead, and I’m now software manager.

RBR: How many people are on the team and what types of skills do they have?

Jason: From the software point of view, we’ve got four members on the team right now. A couple of senior developers and a couple of junior developers. The senior developers provide leadership and the architecture foundation. They allow us to make sure that Ruskin is coded in a way that is extensible and will keep growing in the future. So, they definitely have the lay of the land and the game plan. The junior developers bring in, let’s say, the energy, the drive, and maybe a different perspective. They bring in the eagerness, and it keeps everybody upbeat and moving at a fast pace. So the team really works well in that regard. On the firmware team, we have three senior developers and a junior developer, and they’re responsible for the firmware for all of the sensors and instruments that we produce. They really need to know their stuff because we are focused on low power consumption and large memory capacity in almost everything we do. So, we need to make sure that we focus on quality and make sure that we have attention to detail and testing. They bring a lot of the focus and stability to the team.

RBR: Can you talk a little bit about how the RBR Ruskin software is used?

Jason:  Sure. From a customer’s point of view, Ruskin is the tool that you use to get your instrument to do something for you. You use the software to configure it in order to set your deployments. It will even give you deployment estimates, so you’ll be able to know how long to expect your deployments to last based on the battery and the memory capabilities of the instrument. At the end of your deployment, you’re able to download the data using an RS-485, RS-232, USB, or WiFi connection, depending on what your instrument supports. Once you download the instrument to a data file on your computer or mobile device, you can view and manipulate that data file in Ruskin or you can use it directly with another tool called RSKtools, which is a Matlab library. Ruskin also allows you to graph and plot data so you have a visual of it. Now, we don’t intend everybody to use Ruskin as their data analysis tool, but there are some simple features like the ability to calculate averages and standard deviations, so you can get a little bit of information before you transfer the data to a dedicated data analysis tool. Something that people may not be familiar with is that you can upgrade your instrument firmware using Ruskin at any time. You can also export your data into different formats, Excel spreadsheets or text files, and many other formats. We even have a feature in Ruskin called ‘Comment on Ruskin’ where you can easily log an issue to send back to RBR, either requesting a new feature or detailing something that’s gone wrong to help our support team get to the root of an issue.

RBR: How has the Ruskin software evolved since you started 14 years ago?

Jason: The initial concept for Ruskin was as a version two of our existing RBR Windows software. Back then, that software was primarily used with our existing product line of XR, TR, and TDR instruments, what we call Gen 1 now. The main limitation of that software was it was only available on Windows platforms and we wanted to branch out into other platforms. So, we wanted something that was cross platform. So we took on the Ruskin project, and it’s now available on both Mac and Windows and we also developed mobile versions available on iOS and Android. The first release was essentially a replacement for the existing software package. Once we had that, RBR began development on our second generation of instruments. Ruskin became the main platform for users to interact with these instruments. Today, it is the main platform for all of our instruments. We take pride in the fact that there is only one piece of software required to interact with any RBR device. Ruskin was also expanded to become a tool for our factory processes. It is no longer just software for customers to interact with the instruments, it also allows RBR to configure the electronics with a personality, update firmware, update calibration coefficients, and interact with other in-house processes. Ruskin is not just a customer tool, it’s an RBR tool.

RBR: So, the same codebase is used to run our entire operation in terms of instrument configuration and calibration?

Jason: Yes. It’s very powerful in terms of customer support as well. If something happens in the field where an instrument needs to be reconfigured, or something else that we would normally do at the factory, then our support team can log into that version of Ruskin on a user’s computer and are able to perform factory operations right there without having to bring back that instrument.

RBR: What is your team working on these days?

Jason: Today, the research and development team is developing new sensor technologies which will need to interact with Ruskin. We are also integrating existing RBR products such as our RBRssm inductive modem and our RBRcervello data controller. We are also focused on improving the speed and simplicity of Ruskin. We believe that the better the software works and easier it is to use will ultimately benefit the end user. One such improvement is the sensor calibration process built into Ruskin. Customers who need to perform a correction on their sensors can do it directly through Ruskin. Our own in-house calibration lab uses Ruskin to perform calibrations and so improving these routines has benefits to both RBR and our customers. Another area where we are concentrating our efforts is on developing platforms which allow us to decouple the release of certain content from the Ruskin release schedule. One such service is for distributing firmware images to the field. Another is automated actions performed by our service team. Both of these features we believe will allow us to better serve our customers.

RBR: Do you have a favourite part of the work that you do, that gets you excited and energized?

Jason: Sure. Anytime we are able to develop new technologies or use software to solve real world problems, it’s interesting to me. Also, a lot of our work goes beyond adding new features to Ruskin. We also get involved in solving specific customer issues. Being able to find innovative ways to get around problems they might be having either with a unique instrument setup, or the way that they want to record data, and being able to provide that support to them is great. Especially if somebody comes up against a roadblock, you’re able to get them through that roadblock. So, it helps their day and you’ve accomplished something, which is…it’s amazing.