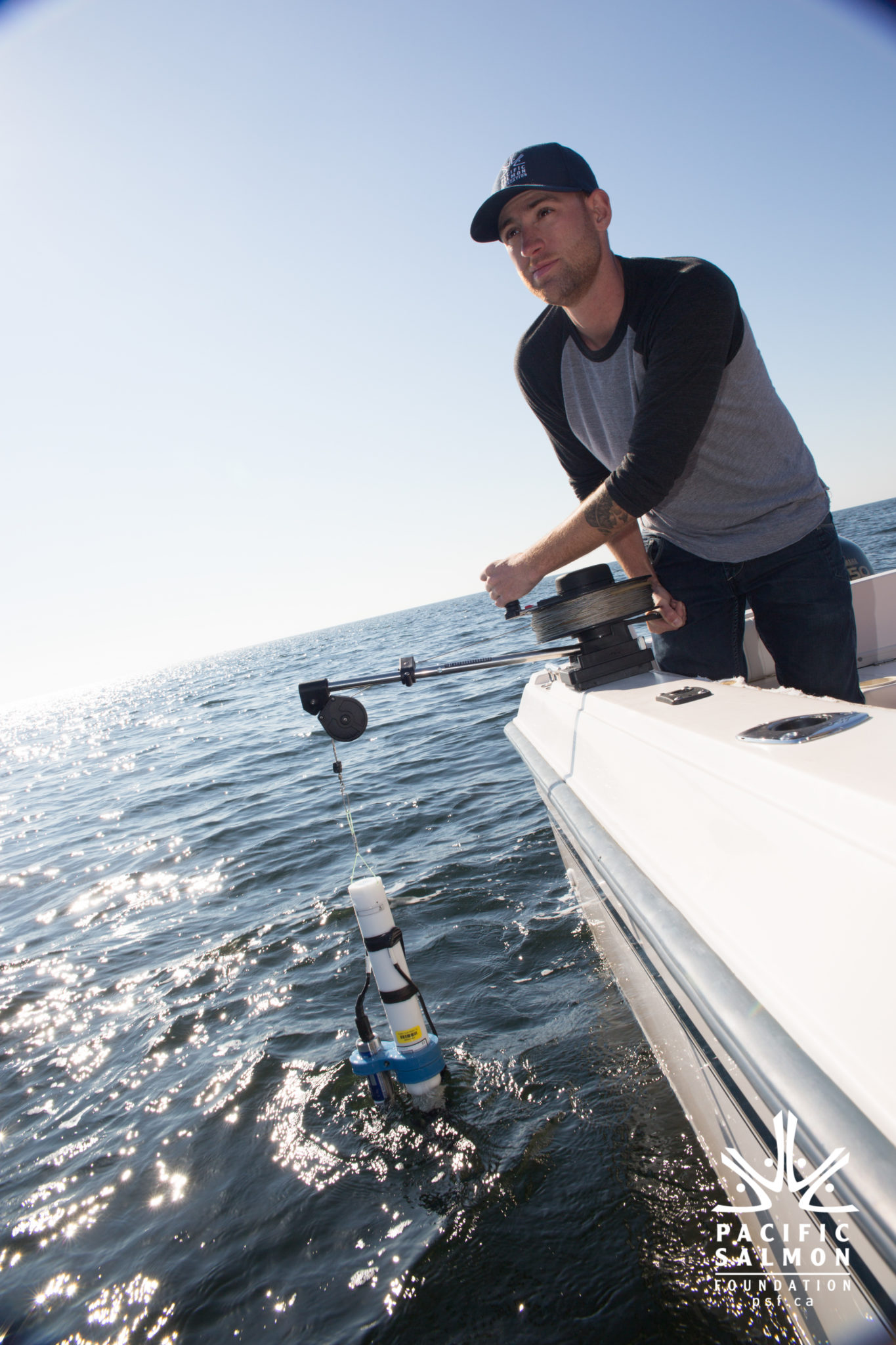 In 2014, the Salish Sea Marine Survival Project (SSMSP) began, launching over thirty scientific studies into the lifecycle of Coho and Chinook Salmon of the Salish Sea. These West Coast fisheries collapsed over twenty years ago, and have not since recovered. At the close of this five-year program, researchers hope to understand why salmon mortality is so high. Their aim is to inform efforts at recovery and at sustainable fishing.

A cross-border initiative (with steelhead studies being of particular interest on the American side), the SSMSP is coordinated by two not-for-profits: Pacific Salmon Foundation, in Canada, and Long Live the Kings (Chinook, the largest salmon, are also known as king salmon), in the United States, and each side of the border has funding of over $10 million.

Over 60 collaborating organizations are involved in conducting the SSMSP studies, which, Isobel Pearsall says, were selected by a team of specialized academic and government researchers. Pearsall is an adjunct professor at the University of British Columbia, and the Strait of Georgia Program Coordinator for the SSMSP.

The studies are categorized as top-down or bottom-up. Pearsall describes top-down studies as directly impacting the fish, including predation, particularly by seals, and disease. Bottom-up studies, she says, involve “productivity in the ocean and the whole trophic web moving up to salmon.” Bottom-up studies include oceanographic conditions, phytoplankton types and the timing of blooms, and how those relate to zooplankton and the forage fish community. “And then, [there are] a lot of focused studies on juvenile salmon themselves.”

At its most basic, the question the SSMSP hopes to answer is this: when and where do the salmon of the Salish Sea die?

To measure oceanographic properties, the SSMSP recruited and trained volunteers, called citizen scientists. “The citizen science program started up in 2015,” says Pearsall. “It really was the brainchild of Dr. Eddy Carmack.”

“I like to call it the mosquito fleet,” says Carmack, an emeritus research scientist with Canada’s Department of Fisheries and Oceans. Carmack was the researcher who addressed the problem of increasing the collection of oceanographic data in Canada’s north. “It occurred to me that the Canadian Rangers, who are like a militia of Inuit who live in the various communities along the Northwest Passage, carry out exercises at least once a year where they go out on the ice and travel some certain distance to maintain sharpness and field capability, and rather than just going out and coming back, why couldn’t they go out and drill some holes in the ice and lower equipment through the ice?” The Canadian Rangers Ocean Watch program, started in 2011 is still running today, using RBRconcerto CTDs.

‘Using this citizen science approach, you can get into the shallow waters, you can get up the bays and estuaries. You can get around locks. You get that quasi-three-dimensional perspective.’Eddy Carmack

When the SSMSP became interested in examining oceanographic conditions at the spatial scale of the Strait of Georgia and at the time scale of several years, Carmack’s advice was to take a similar tack: “[using] this citizen science approach, you can get into the shallow waters, you can get up the bays and estuaries. You can get around locks. You get that quasi-three-dimensional perspective, almost four-dimensional, because when it’s really working and you’re going at weekly intervals, that’s pretty intense survey by oceanographic standards for an area as large as the Strait of Georgia.”

The Salish Sea, a vast marine region made up of the Strait of Georgia, the Juan de Fuca Strait, and Puget Sound, is protected from the Pacific Ocean by Vancouver Island, on the west coast of North America. The Canada–United States border passes through it, and its shores are home to millions of people, including the inhabitants of Seattle, Washington, and Vancouver, B.C.

“It’s such an iconic species in B.C.,” says Pearsall. “It has tremendous aesthetic and cultural significance to people. This is not just in fiscal terms. This is their life. Salmon is B.C. to so many people. It’s a keystone species. This is what B.C. people love to do – they love to go fishing. To lose these very crucial species has been devastating to communities and livelihoods as well.”

The impetus for such a large program arose after individual studies had failed to explain the collapse. The problem is complex and involves many variables, many of which interact with one another. “It would be very surprising if there’s one thing to point at, at the end of this,” says Pearsall. “Most likely it will be many different things, whether it’s changing water temperatures, or loss of near-shore habitat or impacts to the forage fish community. Whatever it might be, there are many things that we’re finding that are impacting the fish.”

“We have a lot of studies that are mirrored on both sides of the border,” says Pearsall. “We try to use the same protocols and do similar types of studies so that we have a large-scale data collection that can be looked at and analyzed together.” 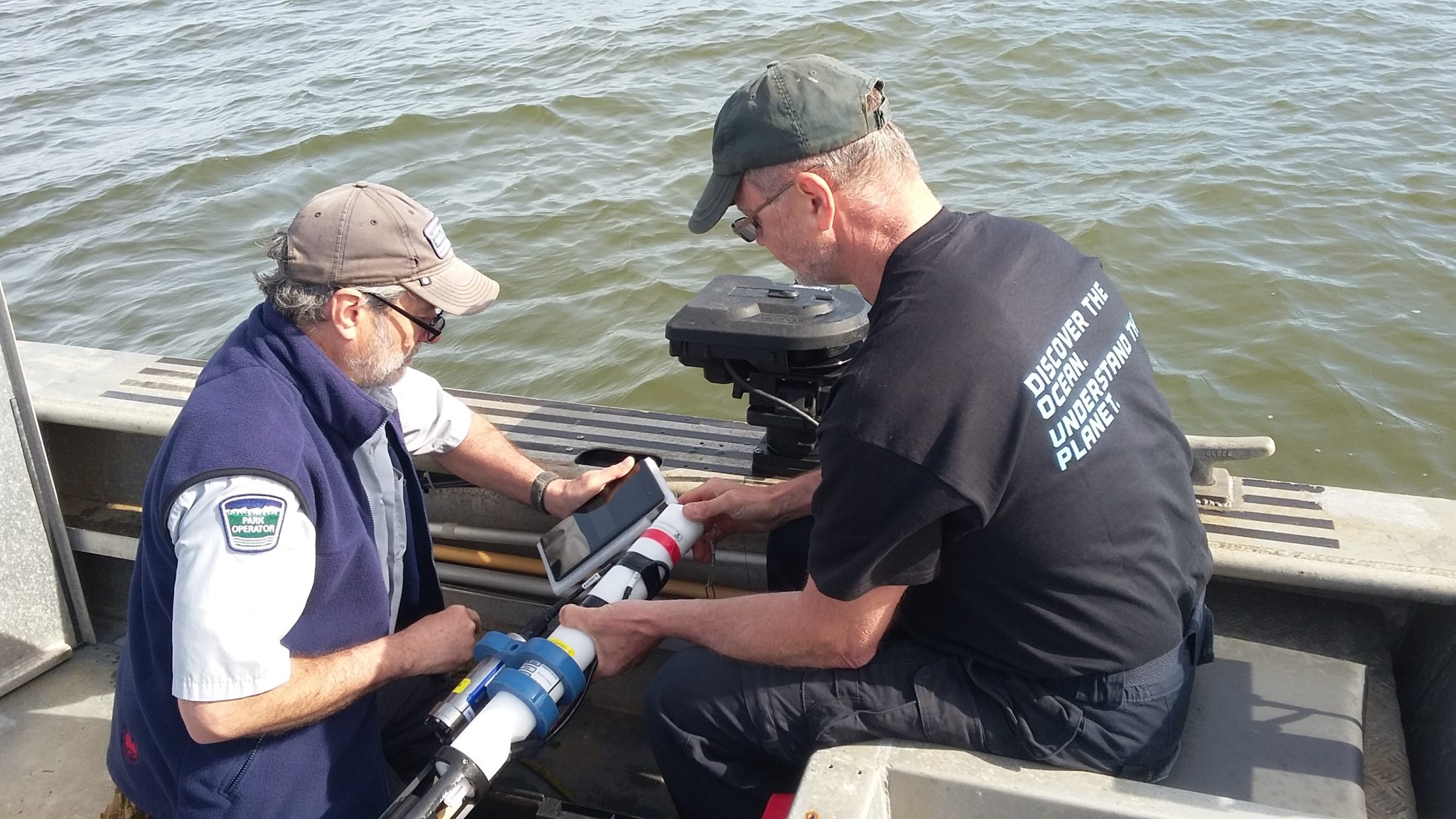 Pacific salmon spend several years in the open Pacific Ocean, a time during which mortalities occur, but the SSMSP studies all focus on the Salish Sea. The SSMSP website says, “the marine survival of coastal and Columbia River Chinook, coho, and steelhead does not follow the same declining trend as the Salish Sea populations. This suggests that the problem lies within the Sea.” The field is narrowed, but to an area which is still so vast as to make data collection a logistical and budgetary challenge.

Leading the citizen science project is Ocean Networks Canada (ONC), a partner organization of the SSMSP. Ryan Flagg is the observatory support engineer for the Innovation Centre at ONC. Flagg says their goal is, “to create the underlying physical oceanographic framework for the other research – to every week take a snapshot of what’s happening throughout the entire Salish Sea.”

Flagg explains that the 8-boat strong volunteer fleet is made up of locals who have access to a boat and are committed to collecting data at up to ten GPS locations weekly or fortnightly. They tend to be retired fishermen, retired and active researchers, recreational boaters, and those who work on the water in some capacity. They are trained to collect water samples using a Niskin bottle and to cast RBRconcerto CTDs, which are equipped with additional sensors to measure dissolved oxygen and fluorescence.

“The RBRs we know have really high-quality data on them,” says Flagg. “We knew that the science community has been using and trusting them already.”

Included in the science kit is a tablet with an app developed by ONC. Flagg explains that they designed the app to be straightforward and easy to use at sea. “We wanted to give them as few buttons as possible, so we could literally put [the tablet] into the hands of an eighty-year-old retired fisherman who doesn’t like using email and still have him feel confident that he can work this tablet and get the data back safely.”

To get their data to ONC, citizen scientists simply retrieve the RBRconcerto and turn on the tablet. They twist the end of the Wi-Fi-enabled RBRconcerto, and the data is downloaded from the CTD to the tablet. Once in a Wi-Fi zone, the data is uploaded automatically from the tablet to ONC.

ONC manages and hosts the citizen science data. “We essentially review it and do a little bit of processing,” says Flagg. “We host the raw data as well as that data that we’ve added some value to, so that anyone can access it and download it.”

A benefit of working with citizen scientists that may not be immediately obvious is having their experiential expertise. Flagg says they looked for people who knew the water, and he reports, “It was really valuable to have feedback from the people going out and saying, well, really, if you’re interested in these things, I know when I’ve gone out on the water for the last twenty years, I’ve noticed the water colour changes because of an algae bloom. Or, there’s interesting things going on around this island. Or, it’s really dangerous to go here, I’d rather move it half a kilometre away from shore. Having that feedback from them has been really valuable to the science as well, to get that more experienced look at what’s going on in the area.”

‘We are able to collect this information at time and space scales that have never been possible before.’Isobel Pearsall

This year, 2017, is the SSMSP’s third and final year of data collection, and Pearsall is happy with the results of the citizen science project: “We are able to collect this information at time and space scales that have never been possible before.”

More broadly, regarding the concluding phases of the SSMSP, Pearsall says, “This summer we will have two and a half years of data, so at that point, we’ll be starting to take a really critical look at what is going on in these different areas of the Strait of Georgia.” And for the final year, she says, “2018 will be mostly focused on analysis, modeling projects, assimilation and development of overarching publications.”

As to the citizen science approach, Carmack takes the long view: “We think that empowering people with the ability to measure their own waters is the message. That will be more important than lets say even a bunch of scientific papers down the road. If you look at bang for buck, value for money and engagement of people, and drawing kids into the game, it should be on every coast in the world.”

More information about the Salish Sea Marine Survival Project (SSMSP) can be found at their website, here.