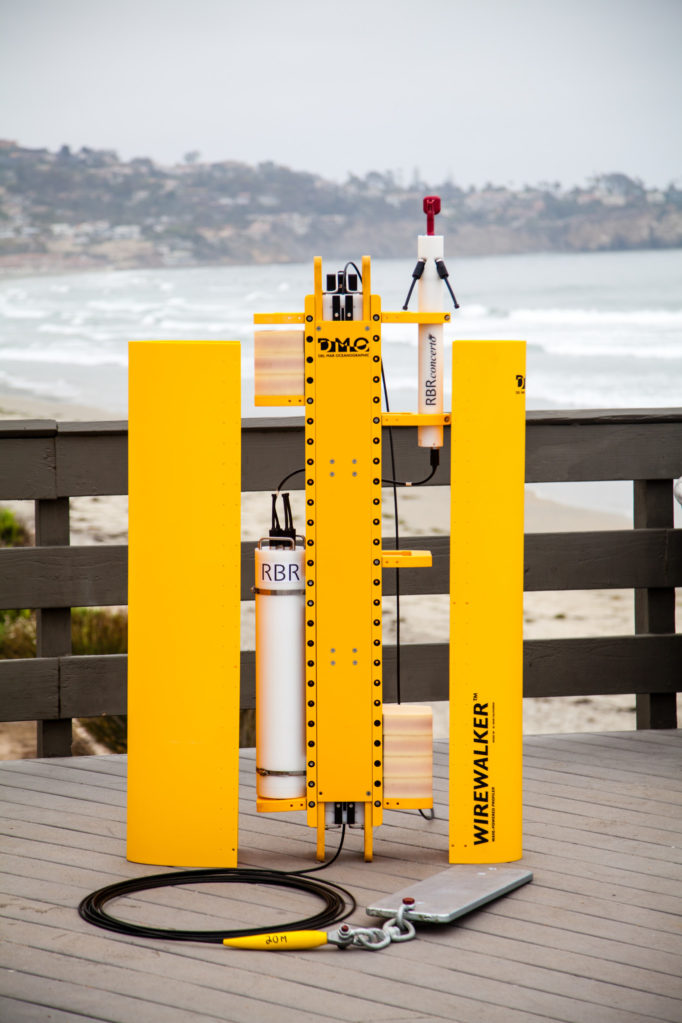 In September of 2016, a surface wave-powered Wirewalker™ descended to the bottom of its 100-m wire, reversed direction, and smoothly ascended to the surface. Onboard, a payload of instruments took detailed measurements of physical and biological properties in Southern California’s La Jolla submarine canyon.

It was the first cycle the Wirewalker would complete at the La Jolla canyon mooring – the first of tens of thousands.

Moored deployment in La Jolla Canyon, California
“As we sit here, we’re past the nine-month mark for a Wirewalker profiling in the canyon just off Scripps Beach, with RBR data telemetered back to land in real time,” says Pinkel, Professor Emeritus at Scripps Institution of Oceanography, in early May of 2017. This Wirewalker system, part of a pilot La Jolla Canyon observatory led by oceanographers Matthew Alford, Drew Lucas, and Rob Pinkel, uses RBR’s wireless telemetry system, enabling the team to watch their data in real time.

The dominant signal – collected by an RBRconcerto equipped with CTD, dissolved oxygen, chlorophyll, backscatter, and phycoerythrin (a fluorescent algal pigment) sensors – in the time series is the striking pattern of twice-daily internal tides. “The waves are about as tall as the canyon is deep, or at least most of the way,” says Lucas, Assistant Professor at Scripps Institution of Oceanography. “So that’s a 200-foot wave in a 300-foot deep canyon, which is pretty amazing in its own right.”

The canyon is likely responsible for the shape, and to some degree, the energy of the waves as they evolve along its length, says Lucas. The waves reflect within the canyon, he explains, with some energy lost, ultimately to turbulent mixing. “It’s the mixing that’s important from the biogeochemical point of view. This is an energetic place. It generates a lot of turbulence, creates a lot of mixing, creates a lot of nutrient fluxes and creates a lot of life because of it.”

“The whole chain of events has been going on like clockwork, probably for thousands of years,” says Pinkel. “It’s fun to actually be able to observe it in such detail for the first time.”


‘The whole chain of events has been going on like clockwork, probably for thousands of years,” says Pinkel. “It’s fun to actually be able to observe it in such detail for the first time.’Rob Pinkel

The key to the real-time data transmission is the RBR inductive modem, which transfers data from the profiling vehicle to the surface buoy. The underwater telemetry system uses a circuit created in the jacketed steel mooring line, which is ground at each end. The sub-surface modem passes information from the sensors onboard the Wirewalker to a ferrite, which transmits it via induced current on the line to a paired modem at the surface buoy. The buoy telemetry is handled by the RBRcervello. Italian for brain, the cervello, a data controller, stores and telemeters the La Jolla data back to land by a GSM (Global System for Mobile Communications) modem.

Southern California’s continental slope has a mostly regular gradient, but is interspersed with submarine canyons, including La Jolla Canyon, which is just swimming distance from the Scripps Pier. Lucas says, “Point La Jolla and the La Jolla kelp bed has been famous regionally at least for a hundred years as a hotspot of diversity and productivity. Back in the old days,” he notes, “they used to catch Volkswagen-sized sea bass.” The importance of the La Jolla Canyon to the local and regional ecosystem motivated the Multiscale Ocean Dynamics group of Scripps Institution of Oceanography (lead by Matthew Alford, Drew Lucas, and others) to maintain a long term profiling mooring there.

The key to submarine canyon research is achieving resolution at small temporal and spatial scales. “The things we want to observe change rapidly in time and with detailed variability in the vertical,” says Lucas. “And more than just the physics, we want to see how the physical dynamics influence the concentration of plankton, distribution of sediments, and concentration of sediments in the water column.”

As of early May 2017, the Wirewalker in La Jolla Canyon has cycled about every ten minutes and traveled over 6,000 km; its instruments measuring all the while at 6 Hz. The RBRfermata, the onboard underwater battery canister, makes possible the uninterrupted collection of data over several weeks. The La Jolla deployment continues to set a personal record for the Wirewalker; the imminent goal is the annual cycle.

Wirewalker Development
When Pinkel started his career in oceanography, “if you wanted to measure a quantity at a variety of depths you would make a mooring with a mooring wire, and clamp sensors on at each depth that you wanted, making, for example, a “thermistor chain”. To double the spatial resolution or depth extent you had to put twice as many instruments on, which doubled the cost. It was not a winning proposition, by and large.”

The first solution he and his team employed was to make use of the Research Platform Flip and computer-controlled diesel-powered winches to take many vertical profiles in quick succession. On a typical deployment, they would collect ten thousand CTD profiles from the surface to 400 or 800 m. Pinkel found there were huge advantages to this method. “The faster we sampled and the higher spatial resolution we attained, the more we saw, so there was this enormous reward for very high-speed profiling. When you only have a single instrument going up and down, you only have one set of calibration coefficients to worry about, and it is much easier to track the quality of the data that you’re getting.”

In 2000, Pinkel and his team began dreaming up how they could achieve rapid vertical profiling without diesel engines (or batteries), using wave energy to get a similar result. “By 2001, we had a publication out with a very primitive Wirewalker system,” says Pinkel. “And we’ve been developing it at Scripps and now commercially through Del Mar Oceanographic since then.”

A design challenge for a profiler meant to cycle thousands of times in one deployment is avoiding repetitive and cumulative damage. Referring to the La Jolla deployment, Pinkel says, “The mechanical reliability, the fact that we’re at nine months on and have not had to replace a single worn out part has a lot to do with the inspired mechanical design of Mike Goldin and Tyler Hughen,” members of the Del Mar Oceanographic team.

It Walks the Line
The current design of the Wirewalker exploits the exponential decay of wave energy with depth “The Wirewalker grabs the wire when the surface buoy and wire are going down, and when the wire is going upward the Wirewalker lets it slip. So with each cycle of the waves, the Wirewalker ratchets downwards,” explains Pinkel. “When it hits the bottom of the wire, the deepest point you want to profile, the cam that grabs the wire releases and it floats up the wire completely decoupled from the sea surface motion.”

Near the surface, the Wirewalker descends slowly: it is moving at nearly the same velocity as the surface buoy and wire. Its descent accelerates with depth as the difference in velocity increases, until it reaches about ten meters – Pinkel says, “it rockets downward after that.”

The surface buoy is designed to bob easily in even short waves: only a 2 to 3 knot wind is required to power the Wirewalker. “As the bigger swell comes up in the open ocean,” Pinkel says, “that’s just gravy.”


‘“One of the interesting things about the Wirewalker, because it’s wave powered, it doesn’t really have an operational cost. Ideally, it cycles simply forever and for free.’Rob Pinkel

“One of the interesting things about the Wirewalker, because it’s wave powered, it doesn’t really have an operational cost,” Pinkel notes. “Ideally, it cycles simply forever and for free.” And so, Wirewalkers are beginning more ambitious deployments, attempting to realize the ideal.

Earlier this year, Lucas deployed a Wirewalker to drift in the Bay of Bengal. “We have some phenomenal records coming out of the Bay of Bengal, where the upper part of the water column is extremely fresh due to run-off from giant rivers that drain central Asia. The air-sea interaction there is critical to controlling the monsoons that affect so much of the world.”

The Wirewalker is making an impact outside of Scripps Institution of Oceanography as well. At the University of Rhode Island, one of Lucas’s colleagues, Professor Melissa Omand, is “measuring the penetration of light and of the natural fluorescence of the plankton, and really going after ocean optics with the platform, which it is also well-conditioned for.”

Pinkel says in the future the Wirewalker could complement global scale platforms by “providing a high space-time augmentation capability for modest cost.” Lucas’s dream is a fleet of quasi-biodegradable Wirewalkers that serves as an “upper ocean or mixed layer complement to the Argo program.”

Development of the telemetry system used by the Wirewalker was funded by the Office of Naval Research and RBR Ltd. The La Jolla Canyon project is supported by SIO Professors Matthew Alford and Drew Lucas using internal UCSD funds.

Learn more about the Wirewalker at the Del Mar Oceanographic website, and about RBR’s inductive modem, here.