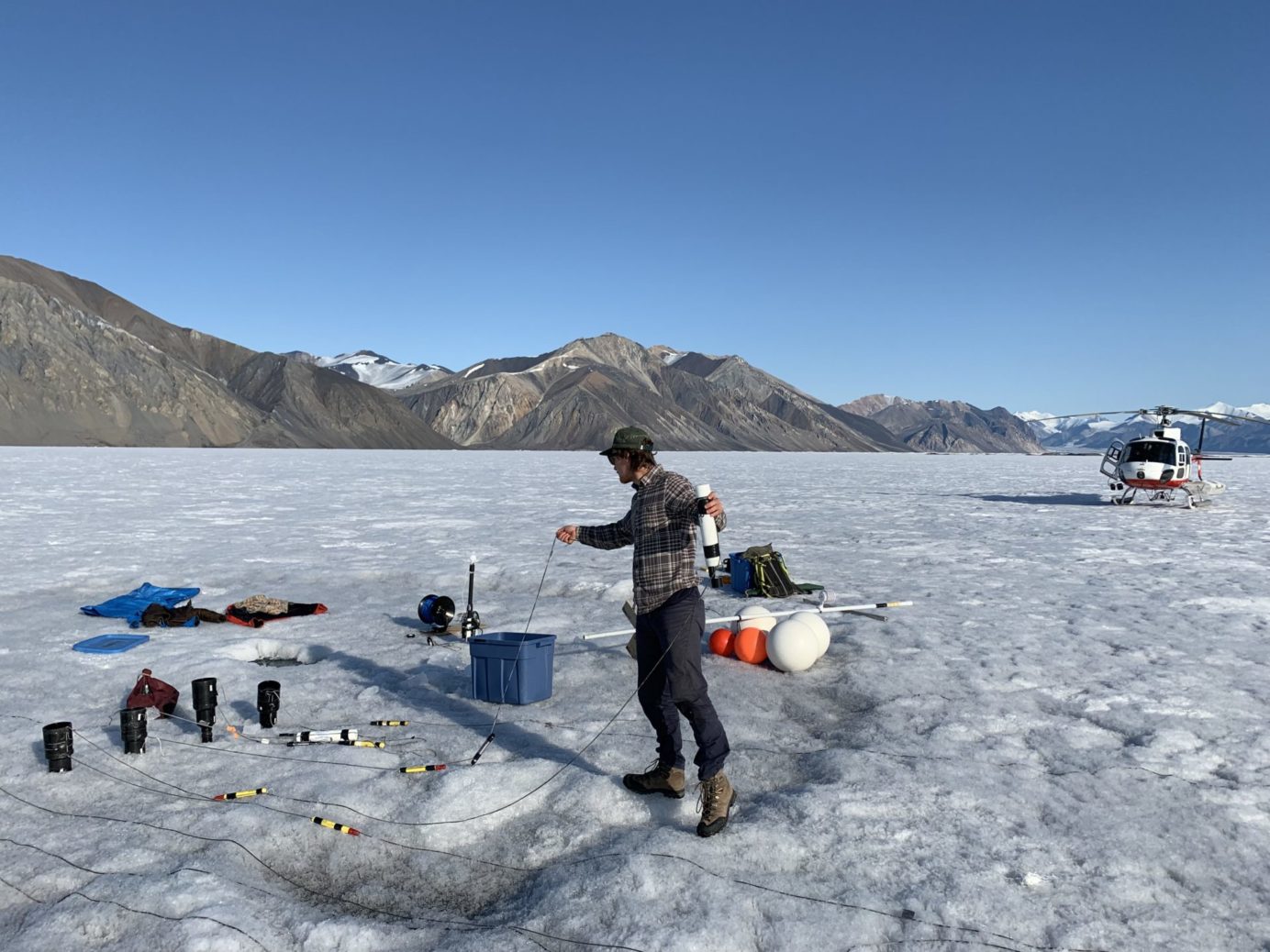 Since the writing of this story, published in ECO Magazine, the Milne Ice Shelf has collapsed into the Arctic Ocean.

A team of Canadian and American researchers are using RBR temperature and salinity loggers to study how the Arctic’s ice shelves are changing over time. By understanding their disappearance, the researchers are able to predict the dynamics of the much larger ice shelves of the Antarctic, which are still relatively intact. Upwards of 100m thick, ice shelves are a critical determinant of sea level rise. They are part of the ocean, floating on it, and so have already made their contribution to sea level rise. Their role is as stoppers: they hold back glaciers from slipping more quickly from land into the ocean. In the Antarctic, without the presence of ice shelves sea level rise will accelerate.

In 1907, Arctic explorer Robert Peary traversed by dogsled across one continuous ice shelf that bound the coast and fiords of the northern coast of Ellesmere Island, Canada’s northernmost island.

Today, with the impacts of the climate crisis, Canada’s ice shelves are now a discontinuous series, with many fiords no longer containing an ice shelf. In some cases, ice shelves fill the mouth of the fiord but no longer connect with the tongue of the glacier, such as in Milne Fiord.

In 2009, Derek Mueller, Associate Professor at Carleton University, started taking CTD casts using an RBR instrument in the water between Milne Fiord’s ice shelf and its glacier. It was the start of a record that he and his team have maintained and expanded on since; in 2011 he and colleagues installed a mooring line that they service each summer. Mueller thinks it may be the longest running mooring in a fiord in the Canadian Arctic.

The record of CTD data has revealed a freshwater ecosystem called an epishelf lake. Formed beneath two meters of perennial surface ice from runoff from the glacier’s catchment area and held back from mixing into the Arctic Ocean by the ice shelf, the fresh water has accumulated between the glacier and ice shelf. It is a lake sitting on seawater; it is the last of its kind in the Canadian Arctic; and it is shrinking.

To better monitor and understand the epishelf lake and the mechanisms draining it before it vanishes, in the last several years, the team’s deployments have increased to include RBRsolo T, RBRduo CT and RBRconcerto CTD loggers, and other instruments, moored at Milne Fiord. The instruments overwinter in the fiord before the data are retrieved the following Arctic summer, and the instruments are re-deployed.

A key mechanism causing the break-up of ice shelves is meltwater finding its way through them, eroding and melting, and arriving at something like a river, but through the ice shelf rather than open to the air. These through-ice rivers are called basal channels, and we know of their existence because they cause deformations in the surface of ice shelves. It is one of these basal channels that is draining the epishelf lake at Milne Fiord.

Since 2017, the team’s instruments have been moored in a basal channel, on top of in the water on the landward side of the ice shelf. Their goal, according to investigator Alexander Forrest, Assistant Professor at the University of California, Davis, is to “quantify the mass and heat flux coming through the channel.” In so doing, they are determining how much water is flowing through the channel, and how it is eroding the channel and destabilizing the ice shelf.

To deploy their sensors in the basal channel, “we drilled through the ice in the channel, at the highest point of the channel, using ground penetrating radar to find out exactly where the channel was.”

Forrest explained the importance of this research, and the timing: “This represents the end member of Arctic glacial systems after hundreds of years of climate change, at the stage of the whole thing collapsing, what happens as the system falls apart.”

Part of this research is being conducted by Jérémie Bonneau, M.Sc. Student at the University of British Columbia (UBC). Supervised by Bernard Laval, Professor at UBC, and Derek Mueller, Bonneau is looking at temperature and salinity changes in the top of the water column of the epishelf lake using data from 10 RBRsolo Ts, three RBRconcerto C.T.Ds, and an RBRduet T.D to better localize the instruments (get the precise depth of the mooring line). Bonneau has developed a numerical model of heat and mass flux to infer how much water flows through the channel and determine changes in the basal channel.

Bonneau has found, using a nearly continuous timeseries of temperature and salinity data from 2011 to 2019, that “the area of the basal channel is in multi-year ice balance equilibrium.” Since 2011, the morphology of the channel has remained overall the same. But, he cautions, the ice shelf in the area of the basal channel is only 8 or 9 meters thick. According to Bonneau, at this thickness, “It can break anytime.”

As to why Forrest chooses, RBR instruments in his research, he says: “For any sort of polar work, you need instruments that are reliable and robust, and that’s why I keep coming back to RBR: You are willing to entertain crazy ideas.”