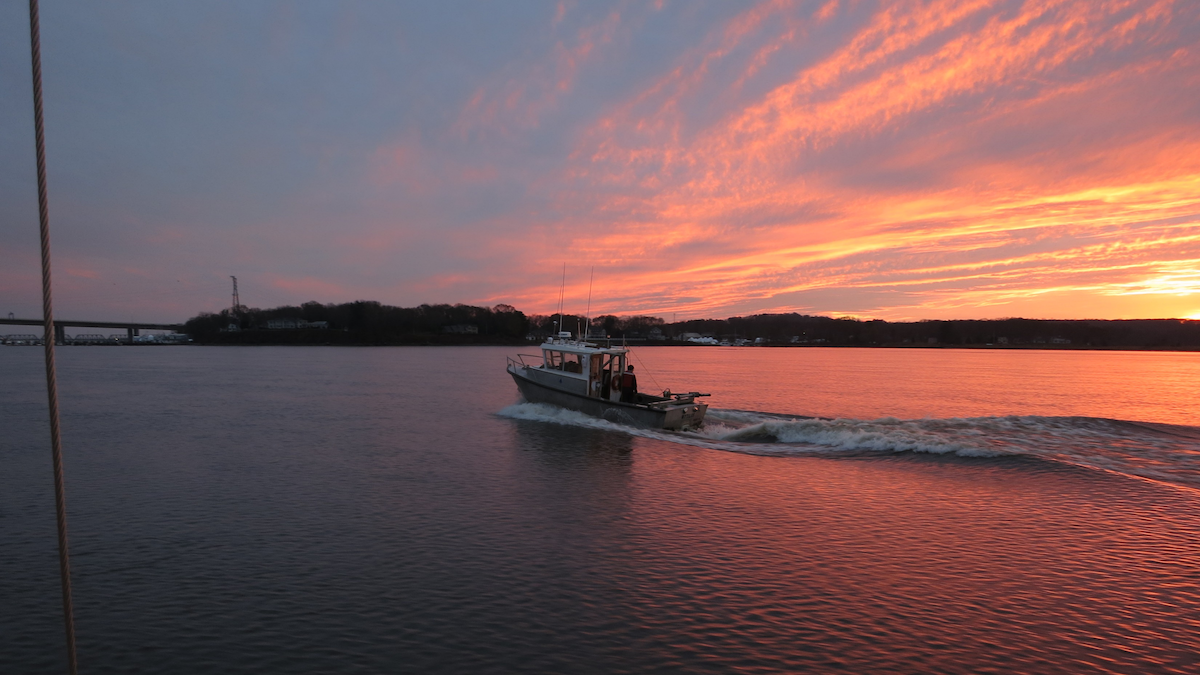 Dr. Rocky Geyer, Senior Scientist at Woods Hole Oceanographic Institution, specializes in estuarine and coastal transport processes, sediment transport, and numerical modeling of estuaries and river plumes. But in actuality, everything Dr. Geyer studies boils down to a deep love of nature and physics. “At its core, science is about answering questions and understanding. For me, understanding how water mixes or the structure of a flow or a front has always been my passion,” said Dr. Geyer, adding that for him, “the beauty is in the structure of these phenomena.”

This love of nature and desire to truly understand ocean dynamics has led Dr. Geyer and his collaborators to continually push what is possible. Whatever resolution is needed, he looks to go further, coming up with new and innovative ways to get to the bottom of these phenomena and discover what’s happening in the ocean.

“The way I look at field techniques is trying to push whatever resolution we need,” said Dr. Geyer. “By doing things that either people hadn’t thought of, or things that people hadn’t dared to do, we can push what’s possible in terms of resolution in the field. And thanks to advanced instruments that really ‘see it like it is,’ we have been able to dive deeper and really understand what is happening in these structures.”

Within this theme of pushing the limits and shifting what is possible, Dr. Geyer started investigating how he could push the resolution of vertical measurements to better capture estuarine and coastal transport processes. “You have this traditional idea of vertical sampling being slow, so it’s sort of turning that mindset on its head and going – no, we can do it much faster and at a much higher resolution,” said Dr. Geyer. “When you’re at sea, and it might take four hours to get to the bottom, a slow, 24-bottle CTD rosette may work perfectly, but when you’re in an estuary, where it takes 15 seconds to get to the bottom, why not speed things up and do way more vertical profiles.” Estuaries are dynamic, so quick turnarounds with closely spaced profiles means that features can be effectively caught, features that may be missed with traditional vertical profiles.”

This idea of pushing the limits, combined with a desire to truly understand the structure of estuaries, led Dr. Geyer and his team to create a rapid vertical profiler, one that can continually and rapidly measure processes within estuarine and coastal environments.

The rapid profiler is attached to a fast winch with a free-wheeling clutch.   As the boat moves forward, the profiler free-falls to the bottom, and it is pulled back up to the surface as fast as possible, cycling continuously to get a high-resolution transect within the study area (Figure 1). The rate of sampling comes down to the free-fall speed of the profiler, the depth of the water, the pull-back speed of the winch, and the speed of the ship. With a free-fall descent of about 2 m/s, a water depth of 10 m, and a ship speed of 4 knots, the profiler takes only 5 seconds to get to the bottom, but in the meantime 20 m of line has gone out. That is why the winch needs a clutch, to let the line go out fast – at about 4 m/s. But it also needs to pull it in fast, because the faster the winch, the sooner you can start the next profile. This speed means you get a much better resolution than other vertical profilers. “It hauls back at a rate of about 200 m/min, which is about five times as fast as typical winches. It’s really pretty fun” added Dr. Geyer. This speed means that the casts are as close together as possible, but it’s also necessary to ensure the instrument reaches the bottom.

The instrument itself is incredibly lightweight. “The beauty of it is that it doesn’t weigh anything,” said Dr. Geyer, adding “we had a five-pound lift ball, and it went too fast – about 4 m/s – so we had to put a few plastic floats at the top to slow it down so it would fall at 2 m/s.” Between the lightweight profiler and a skinny line, it’s a very low drag system that allows the profiler to effectively free-fall through the water column.

The profiler itself is fitted with an RBRconcerto3 C.T.D with temperature, conductivity, and pressure (depth) sensors along with additional turbidity and fluorescence or dissolved oxygen sensors. Coupling biogeochemical and physical properties creates a better picture of the structure at these fronts, providing more information about the dynamics of different water masses and how they are mixing within these estuarine environments. As such, adding dissolved oxygen and fluorescence was of interest to Dr. Geyer and his team. These added sensors provide additional information on the biogeochemical properties of the water, as well as its quality and ecological significance.

The rapid vertical profiler enables Dr. Geyer and his team to get a fuller picture of estuarine mixing in diverse environments (e.g., Figure 3) and versions of the rapid vertical profiler have been used to collect data in other studies – published in Honegger et al. 2017 and Corlett & Geyer 2020. In Honegger et al. 2017, the team utilized the rapid vertical profiler in combination with a number of additional sampling methods to collect data at the Columbia River Mouth from the 24th of May to the 12th of June 2013. The rapid profiler was used to perform transects on the R/V Westwind alongside an ADCP, a bottom-mounted mooring, as well as shore-based and along-track radar. By combining these methods, the team was able to observe and measure tidally recurring, oblique, internal hydraulic jumps occurring within the mouth of this stratified estuary.

Figure 3: Four profiles taken with the rapid vertical profiler al the mouth of the James River in April, 2019.

In Corlett & Geyer 2020 the team also utilized the rapid vertical profiler alongside a number of other instruments to perform shipboard and moored observations of the Newark Bay sub-estuary and New York Harbour in the spring and early summer of 2016. Moorings were placed along the bottom of the estuary and in order to capture the along-channel variability of estuarine characteristics the vertical profiler was used to continually profile while traversing the transects at a rate of roughly 3 m/s. It was able to measure water properties at a rate of 12 Hz, producing salinity profiles with a vertical resolution of 0.1 m roughly every 70 m along the channel.

Finally, the full picture of the water column structure revealed by the rapid vertical profiler is shown in Figure 4, showcasing the changing salinity structure across a transect of the Mobile Bay plume in June 2021. By utilizing the profiler the high resolution structure – in this case salinity – can be observed across this front.

Ultimately, by combining high-resolution instruments like the RBRconcerto3 C.T.D with innovative sampling methods it is possible to observe what was thought to be unobservable, unravelling the beauty and complexity of these estuarine phenomena.

To learn more about the RBRconcerto or how RBR instruments could support your project’s needs contact us for more information.