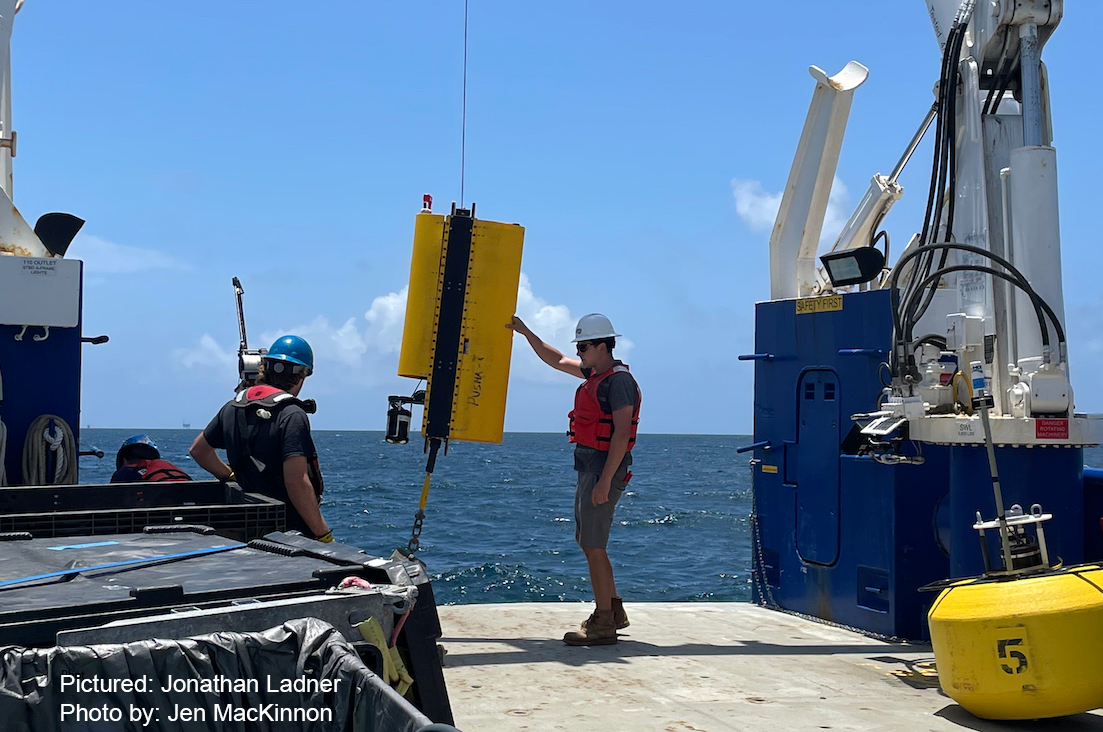 The coastal ocean is a dynamic and productive environment, critical for the success of fisheries, tourism, and local economies. But these productive environments are also associated with a variety of complex oceanographic features. To better understand and protect these ecosystems, many physical oceanographers are diving deeper into the dynamics that drive mixing and water exchange.

Complex coastal features like currents and eddies drive mixing of different water masses, which can impact biological productivity and the extent of hypoxic or anoxic zones. Understanding what physical processes facilitate mixing, and in particular vertical mixing between surface and bottom waters, is essential, particularly in coastal areas that rely on healthy, oxygenated bottom waters for the success of their local economies.

The Submesoscales Under Near-Resonant Inertial Shear Experiment, or SUNRISE, project looks at the interaction between wind-driven near-inertial oscillations and internal waves with submesoscale fronts, eddies, and instabilities. In essence these are the physical processes that drive mixing of different water masses, setting the structure of heat, freshwater, anoxic zones, and more in the coastal ocean. The goal of this project was to dive into these physical features that drive mixing in a highly dynamic environment – the northern Gulf of Mexico. This site was selected as the ideal location for the SUNRISE project as a result of its importance to local fishing and shrimping communities as well as its unique combination of features – a diurnal coastal sea breeze, an inertial frequency of 24 hours, and a significant freshwater plume.

The inertial frequency of currents varies globally as a result of the Coriolis effect. Near 29 degrees latitude – in the northern Gulf of Mexico – wind-driven inertial oscillations have a natural resonance of 24 hours. In addition, its diurnal coastal sea breeze – in which wind blows onshore during the day and offshore at night – is nearly resonant with this internal frequency. The resulting reinforcement of currents is coupled with a significant input of freshwater from the Mississippi and Atchafalaya Rivers, which drain approximately a third of the continental US’s freshwater.

Combined, these unique features made the northern Gulf of Mexico an ideal site to study these physical dynamics in a highly productive and important area for humans. Dr. Jen MacKinnon, Professor at Scripps Institution of Oceanography and one of the Co-Chief Scientists of this survey, identified the location itself as one of the key reasons the study came to be: “We found a spot where there was a strong river with strong lateral density gradients, at a latitude where the sea breeze is resonant, and in an area where these physical dynamics really matter to society. Really that was sort of the selling point of this proposal; through this project we could investigate this interesting intersection of physics, in an area where it really matters.”

The project was specifically focused on the edges of the Mississippi and Atchafalaya River plumes in the northern Gulf of Mexico, in order to tease apart and better understand the processes that set the structure of mixing, heat, anoxic zones, and more. In order to gain as full a picture as possible of these interactions, the team used a suite of instruments, ranging from towed lines to buoys and autonomous boats. By using a number of different techniques concurrently, the team was able to see different spatial patterns simultaneously in multiple different places and at different scales.

The team utilized a number of RBR instruments to support their measurements, one of which was a towed 20 m thermistor chain which profiled from the stern of the ship. This included a combination of RBRsolos to measure temperature and RBRconcertos to measure temperature, pressure, and conductivity. In addition, the OSU autonomous zodiacs were also fit with a thermistor chain of RBRsolos and RBRconcertos in order to capture fine-scale horizontal gradients of near-surface features.

The SUNRISE team also used two Wirewalkers during this survey. The Wirewalker, a wave-powered profiler from Del Mar Oceanographic (DMO), is equipped with an RBRconcerto C.T.D, as well as velocity, optics, and oxygen sensors. Using the power of waves, the profiler ratchets itself down every time a wave passes and this continues until the profiler reaches the bottom, at which point it is released and floats back to the surface. A full vertical profile takes approximately two minutes, providing the SUNRISE team with fast measurements of the water column.

Using the Wirewalkers also allowed the SUNRISE team to anchor their measurements: “We had two big ships and two of the OSU autonomous zodiacs simultaneously going back and forth across the river plume and then the Wirewalkers were in the middle of that pattern, effectively anchoring the data across time and space,” explained Dr. MacKinnon. Combined, these instruments were able to craft a full picture of the physical dynamics occurring at these river plumes.

Many of the instruments used in this survey were from RBR, and the reason why the team preferred RBR instruments was clear: “RBR instruments are the best for this,” explained Dr. MacKinnon, “everyone we know only uses RBR instruments for this type of work because they not only sample at 1 or 2 Hz for the solos, depending on the year, but their actual resolution is that fast as well.” The fast sampling rate combined with a time constant of ~1 second means that these sensors are responsive enough to resolve fine features in the water column. “A lot of the structures of the types of instabilities we’re looking at are these filament or feathery, fine-scale structures that are typically hard to measure, but with these instruments we can see these features in all of their glory,” said Dr. MacKinnon. Ultimately these instruments allowed the SUNRISE team to achieve the high horizontal resolution needed for the study.

The size and robustness of RBR instruments was also a key benefit for the SUNRISE team: “It’s hard to make a CTD that’s super small and the RBRconcertos are pretty good, they’re about as small as you can get,” noted Dr. MacKinnon. In fact, the RBRconcertos are so lightweight that the SUNRISE team was able to easily strap them onto a towed line with tape and some hose clamps: “It’s kind of like a MacGyver situation,” she laughed. “They’re also shockingly robust,” she added, “we’ve been in situations where we’ve accidentally banged them up and they don’t break.”

Finally, the compatibility of the RBR Ruskin software is one of Dr. MacKinnon’s favourite features: “Almost all academics I know use Macs only and the RBR software seems to work extremely well with these systems,” adding, “We have so many of these RBRsolos onboard, dozens, and so each of them has to be downloaded. The fact that everyone can just plug the instruments into their laptops and immediately download the data makes our lives so much easier.” This ‘plug and play’ feature certainly helped to simplify the data collection for the SUNRISE project.

A 2-year study, the SUNRISE project is set to go out again in 2022 to collect more data. The plan is to follow a similar cruise track, using these instruments to further tease apart physical dynamics in the northern Gulf of Mexico that drive mixing in this unique environment. The SUNRISE team are hoping this study will help explain these physical features in a way no one has been able to do before: “One of the coolest things about a research cruise is seeing things that no one has seen before, and through this project we’ve certainly been able to see unique phenomena that has never been observed.”

The RBRconcerto and RBRsolo are flexible, light-weight, option-packed loggers that can be customized to suit a project’s needs. The Wirewalker is a unique, wave-powered profiler that provides vertical measurements of the water column with real-time telemetry and hosted data. To learn more about how RBR instruments could support your project’s needs contact us for more information.