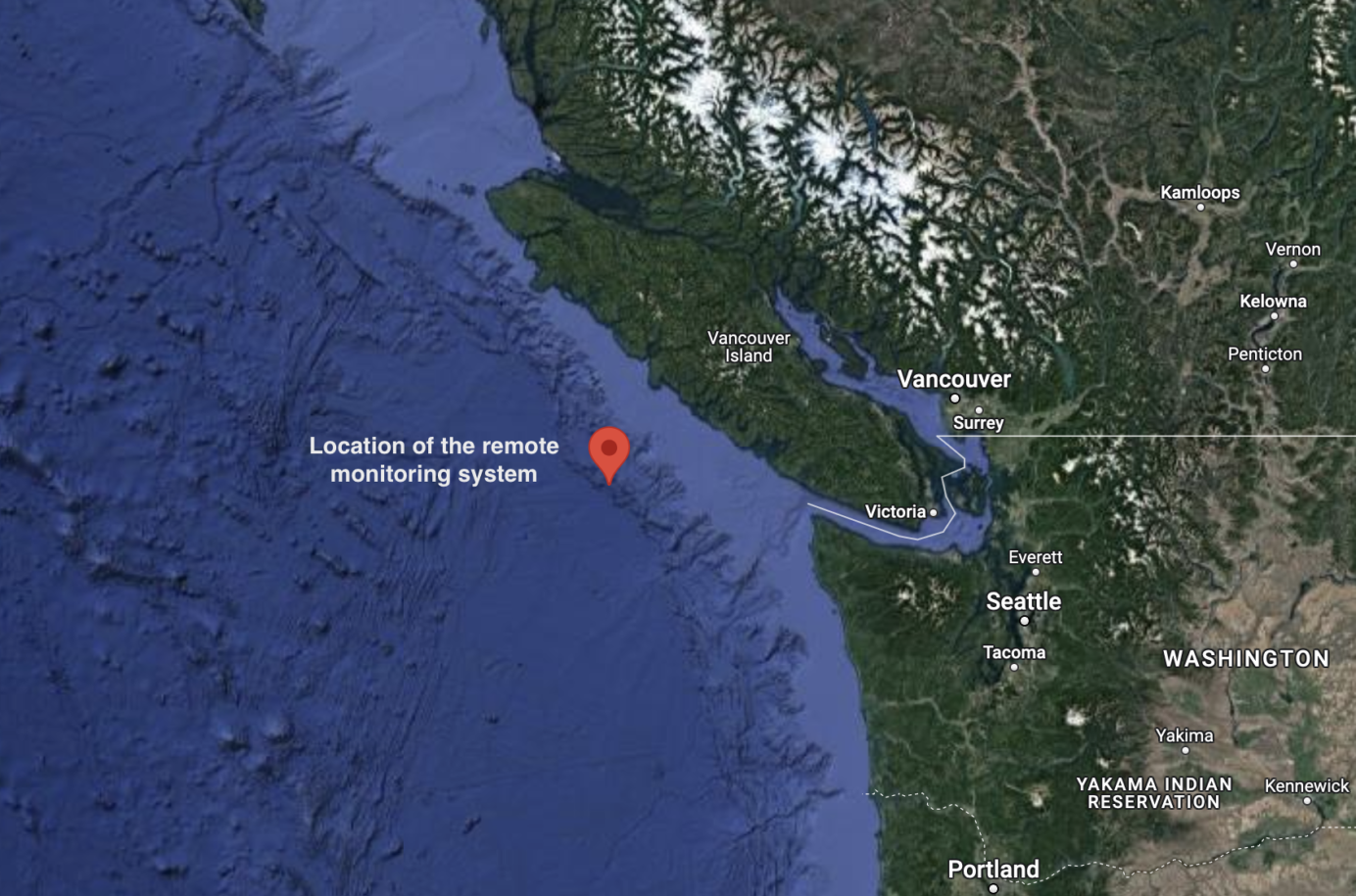 In 2021, RBR and Ocean Networks Canada (ONC) collaboratively designed and deployed a suite of instruments tailored to long-term and remote seismic research. This system is serviceable by remotely operated vehicle (ROV) while deployed, addresses instrument drift internally, can be deployed individually or integrated into a cabled array, and is entirely monitored by a portable data controller and power hub. Deployed in the Cascadia subduction zone off western Vancouver Island, B.C., Canada, it is adjacent to but disconnected from ONC’s North-East Pacific Time-series Undersea Network Experiments (NEPTUNE) cabled observatory. The project is led by the RBR research and development team together with ONC’s Dr. Martin Heeseman, a marine geophysicist interested in seismology, tectonics, tsunamis, and scientific seafloor drilling.

Extended deployments allow researchers to understand overarching trends in oceanographic parameters that cannot be resolved in shorter observation periods. They show long-term variabilities, for example seasonal variability, and are more likely to capture abnormal or unexpected events. Long-term deployments are also considered more cost-effective than a series of short-term deployments, as they reduce ship time and deployment cost.

In general, long-term oceanographic observations are limited by the instrumentation’s power consumption and storage capabilities, and this was the biggest challenge the teams aimed to address. Instrument packages are typically deployed in one location for months to years and need to be entirely self-sufficient. In addition, as opposed to short-term deployments, which communicate with researchers in real-time or at regular intervals, long-term deployment platforms are usually isolated until the planned recovery date.

One notable exception are cabled instrument arrays, such as ONC’s NEPTUNE observatory. Instruments connected to the reinforced fibre-optic cable infrastructure have a direct communication link to computers onshore. Some networks also supply power to the instruments. Unfortunately, these networks are incredibly cost-intensive to build and maintain and are feasible in only few areas. The challenge the teams faced was how to get the same amount of data from a region where the infrastructure doesn’t exist. 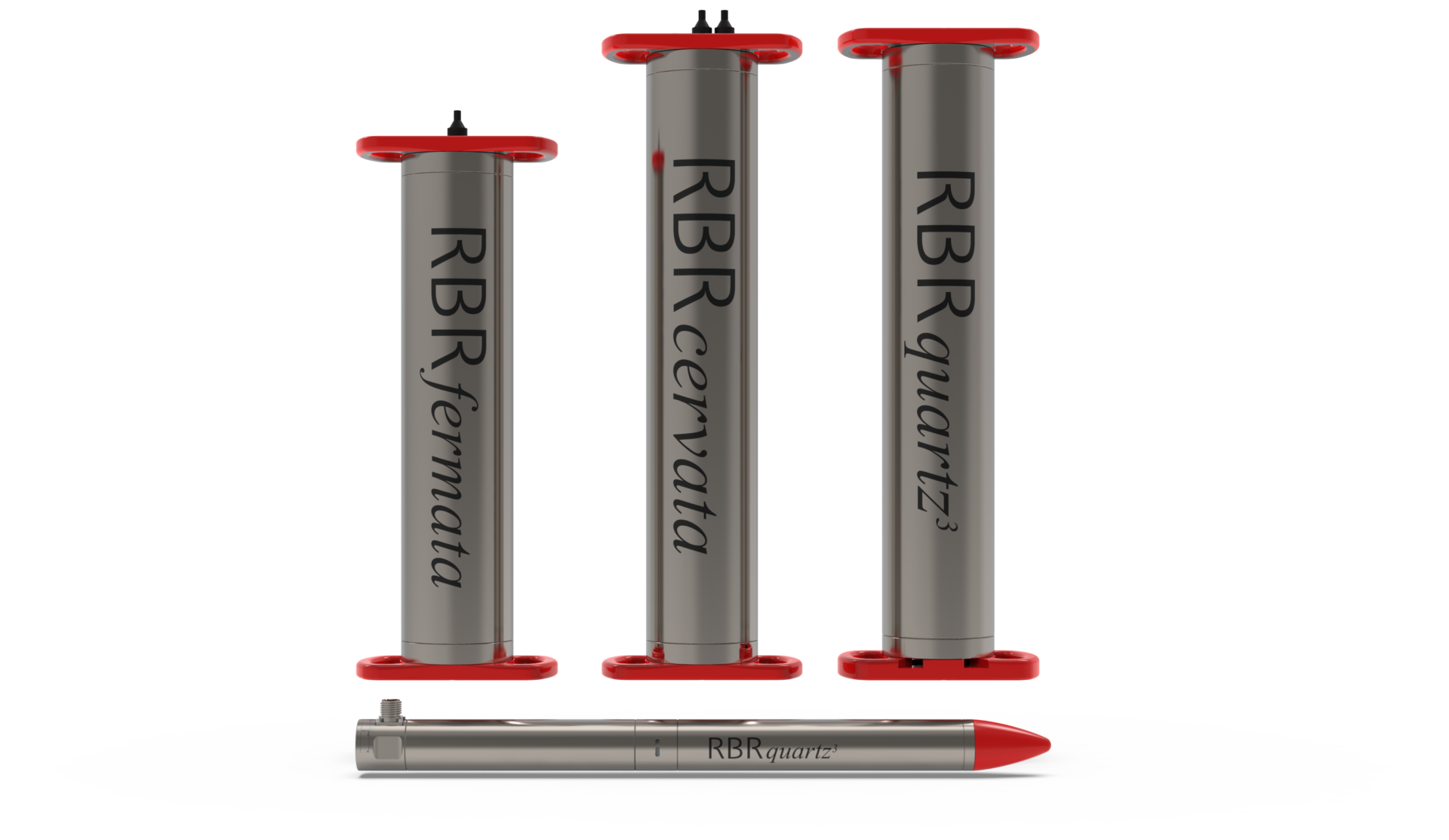 Breaking the traditional division between “product developer” and “product user,” both RBR and ONC took an active role in all stages of the project, drawing on each other’s strengths to put these observation platforms in place.

“We wanted to design a product that is broadly useful, but that is also tailored to ONC’s specific application,” says Greg Johnson, RBR president. “We have the technology, we have the resources available, and we have the support we can offer when needed. It really became a question of how we can use all the tools we have together to make a highly successful project.”

Working so closely with ONC has allowed RBR to address challenges from different knowledge bases, not only in product development but also with data processing and troubleshooting. For example, when Heeseman discovered an abnormality in his data, he was able to work directly with the developers at RBR to quickly investigate the underlying cause. The teams found that less than 0.03% of the data were affected (less than 24 hours of data per year of deployment) and were able to collaboratively design and implement a solution to address the issue. 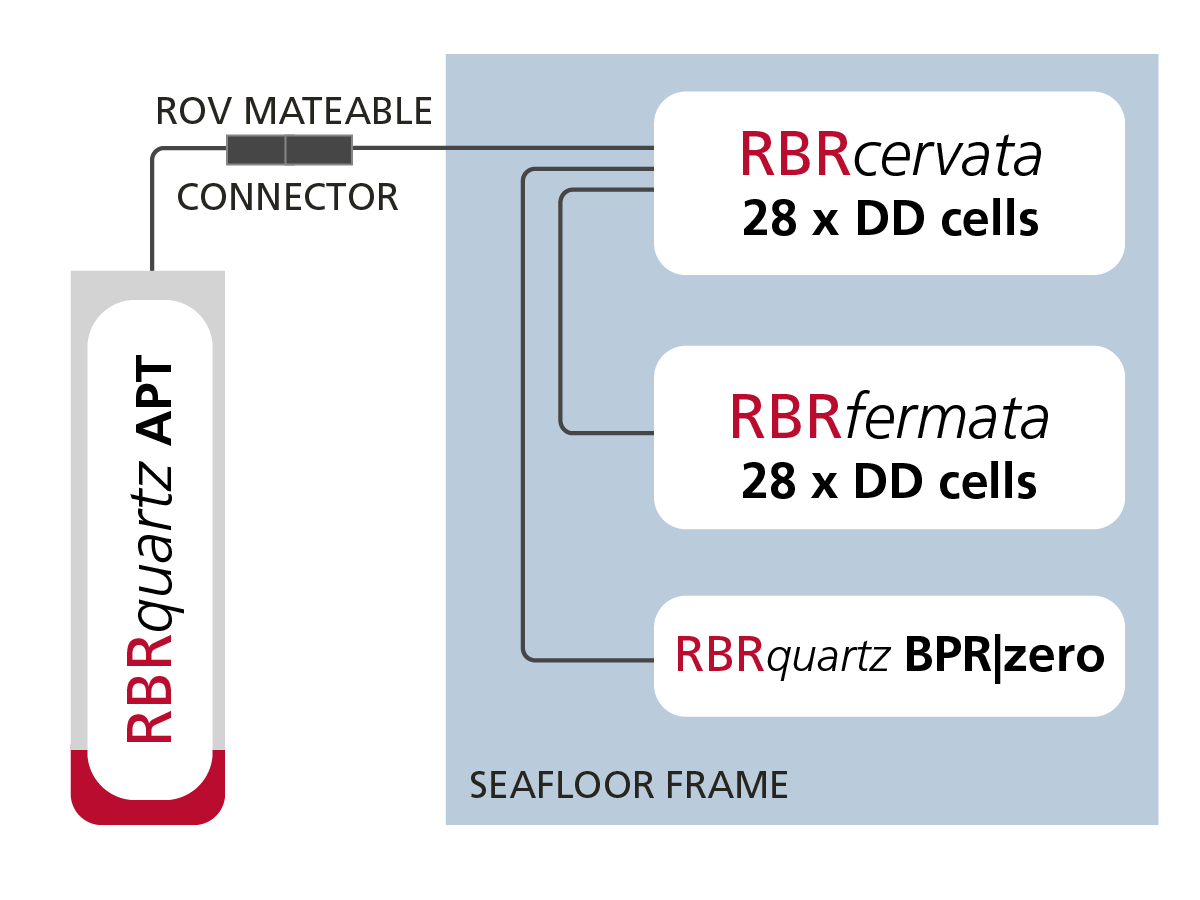 Instrument suite block diagram. The RBRquartz³ APT is buried at a distance from the seafloor frame.

The RBR-ONC instrument suite has three components: an RBRquartz³ BPR|zero (bottom pressure recorder), an RBRquartz³ APT combined BPR and accelerometer, and an RBRcervata brain-and-power hub. The system also includes an additional RBRfermata battery pack. It is entirely serviceable by ROV, which is one of the requirements of the project.

All instruments will tend to drift over time. The RBRquartz³ BPR|zero is a unique version of the RBRquartz³ BPR that actively measures its drift based on multiple measurements and recalibrates itself as needed. Designed specifically for deep long-term deployments, it can detect 0.01mm changes in surface water level from 1000m below the surface. It uses an integrated Paroscientific Digiquartz® pressure sensor to achieve a pressure resolution of 10ppb, and also has a high-accuracy temperature sensor. The RBRquartz³ BPR|zero is currently integrated into both the remote system and the NEPTUNE observatory.

The RBRquartz³ APT is a single-tool solution for deep-sea early earthquake warning and tsunami monitoring. This instrument includes a research-grade triaxial accelerometer, a high-accuracy temperature sensor, and an integrated Paroscientific Digiquartz® pressure sensor. Since recalibrating the accelerometer’s orientation is quite involved, the teams added some customizations such as modifying the instrument connectors to be ROV-mateable, eliminating the need to retrieve the APT when swapping out the other instruments. 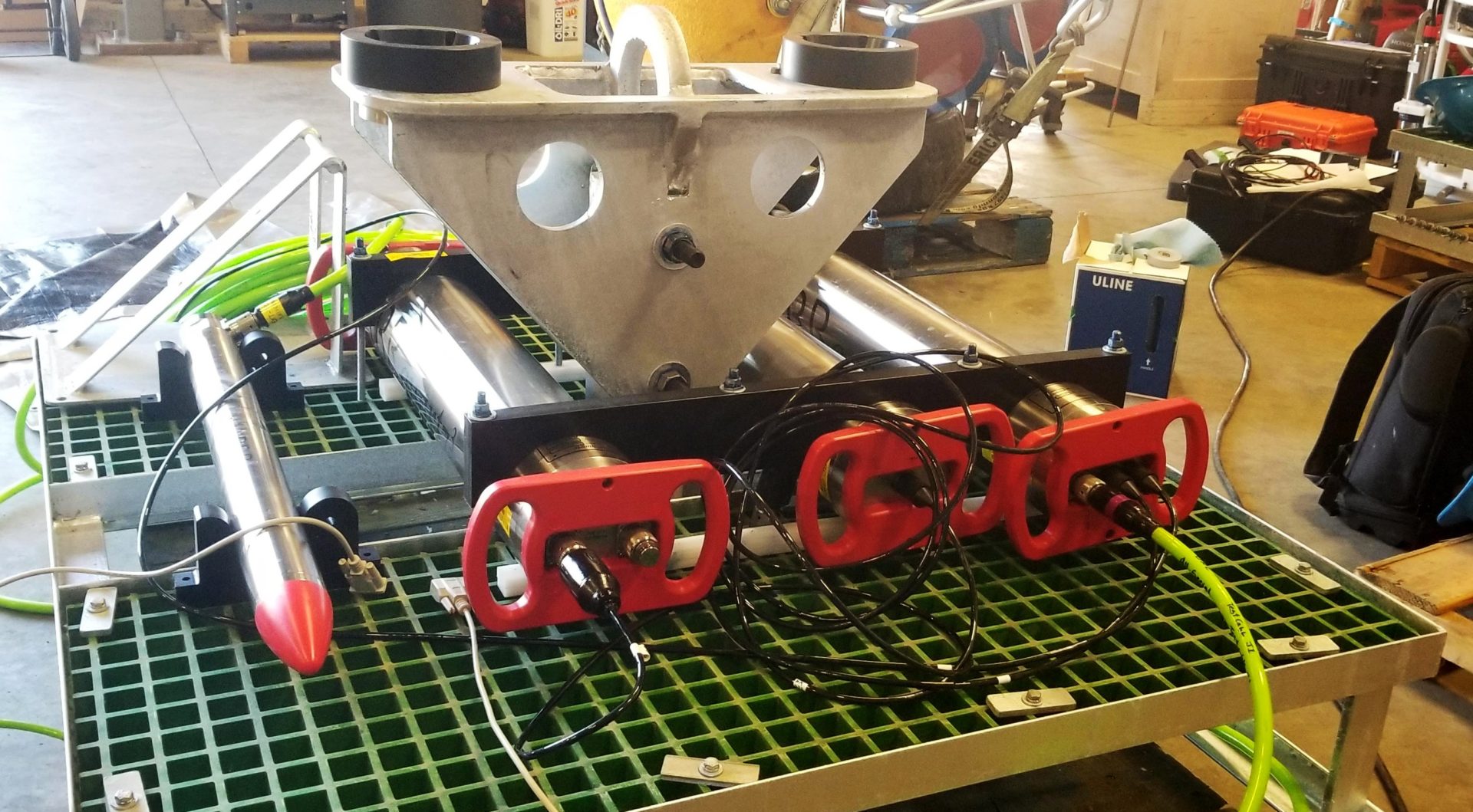 The instruments mounted on the seafloor frame. (Photo: ONC)

The teams were also able to adapt the RBRcervata data controller and power hub to Heeseman’s application, for example by designing a simple way to resynchronize its onboard clocks just before deployment and just after recovery to correct for drift. The RBRcervata is a combination of the RBRcervello data controller (“cervello” being the Italian word for brain) and the RBRfermata battery canister. It has a battery life of roughly two years on lithium batteries, which the teams were able to extend to four years with an additional RBRfermata. It continuously downloads the internal storage of the RBRquartz³ BPR|zero and RBRquartz³ APT to its own 128GB SDXC memory card, creating a central data location. Both the physical design and its internal software allow the RBRcervata to be easily swapped out by ROV without disrupting the other instruments, ensuring truly continuous monitoring. In addition, the teams can process the data from the recovered data controller while the newly deployed hub continues the observations.

Researchers are increasingly looking for innovative technology to address tougher and tougher problems in oceanography. This monitoring project shows how tight collaboration between industry and researchers enables long-term deployments in otherwise inaccessible areas. Working together along all stages of the project creates a unique blend of expertise with tangible benefits for both parties.

“RBR was selected for this project because of its proven performance and track record of responsive customer service,” writes Heesemann. Working together to solve technical and logistical issues in cutting-edge applications and instrumentation is a mindset that the ONC researchers share with the team at RBR.

This story was previously published in the December 2022 ON&T Special Edition: The Future of Ocean Technology.