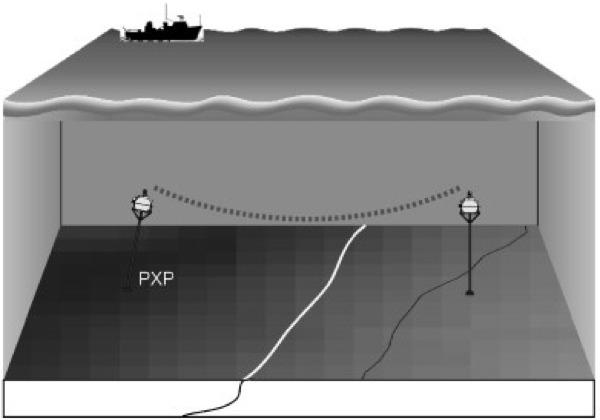 The submarine acoustic rangefinder accurately measures the distance between two points by sending a call signal from another device installed on the seabed at a remote location and measuring the time until the response signal returns. As shown in the figure below, it is possible to grasp that the distance between the points where the two devices are installed changes due to the tomographic motion or the like, by continuing such acoustic ranging observation for a long time. When calculating the distance from the round-trip time of the signal, the result changes by several tens of centimeters due to the difference in sound speed. The main cause of the change in sound speed is the change in seawater temperature, so the RBRsolo T|deep logger data is useful to compensate for this. Photo credit: Osada et al. (2008, Ocean Engineering）

The survey of seafloor crustal deformation requires long-term observation data, and the seabed acoustic range finder is operated on the seabed for about two years. Even if there is an individual difference in the initial value of each T sensor, the relative temperature change is more important.

Professor Hino tested five RBRsolo T|deep|slow loggers in a bundle before using them for the study and compared the variations of the five sensors. He decided to order because there was little drift and good results.

It is well known that the battery life of the RBRsolo T logger is long-lasting. Perhaps less well known but a real strength, is its stability.