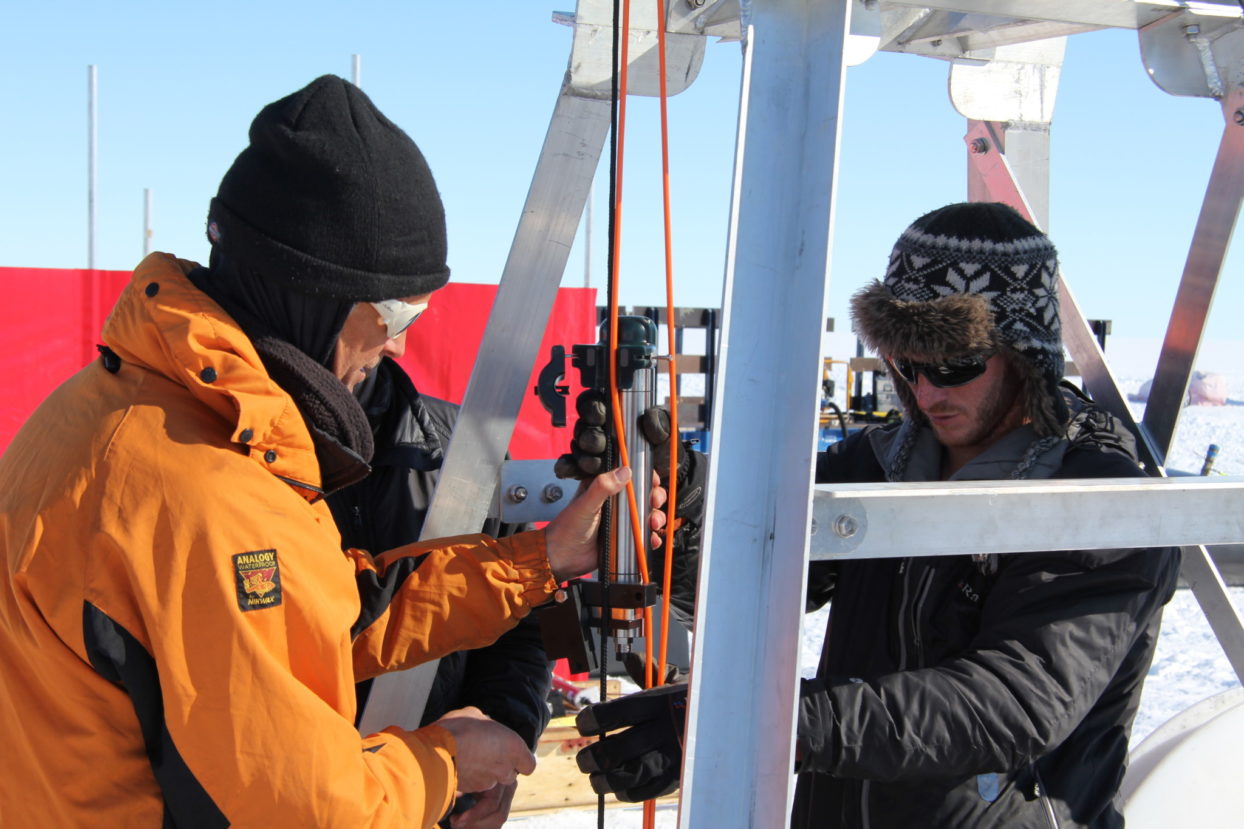 A hundred years later, some things haven’t changed—and many things have. In spite of its bitter cold and long months of darkness, Antarctica still possesses a certain intrigue for scientists around the world. It still pushes personal limits and technological boundaries. As it has become a focal point for global climate change discussions, one thing that has changed is the growing interest in exploring and understanding what is happening in the frigid waters below the surface of its great ice shelves.

Oceanographer and drilling engineer Dr. Keith Makinson was one of a seven-member crew from the British Antarctic Survey (BAS) and University of Bergen (Norway) who travelled to the Filchner-Ronne Ice Shelf in Antarctica in 2014. Their crew was responsible for drilling through over three-quarters of a kilometer of ice to access the ocean and deploy a suite of instruments designed for long-term monitoring.

By ice volume, the Filchner-Ronne Ice Shelf is the largest ice shelf in Antarctica.Dr. Keith Makinson

“By ice volume, the Filchner-Ronne Ice Shelf is the largest ice shelf in Antarctica,” Makinson said. Covering an area of 450,000 km, it is nearly the size of France floating on the ocean. For the scientific community, it is an important indicator for the health of Antarctica and oceans around the world.

From where icebergs break off to the southern grounding lines, the ice thickness ranges from 300m to 2,000m. “Any waters flowing underneath the ice shelf are cooled and freshened by the meltwater,” Makinson said. Tidal and buoyant forcing drives circulation, while the ice shelf melts at a rate of about 4,000 tonnes per second.

“[These water masses] outflow as very cold, dense water that makes its way across to the continental shelf break, then dives down into the deep ocean of the Weddell Sea – and ultimately becomes Antarctic Bottom Water, which is a water mass that is one of the most extensive in the world.” This cold, dense water mass is found in the deepest parts of many of the world’s oceans – even north of the equator. 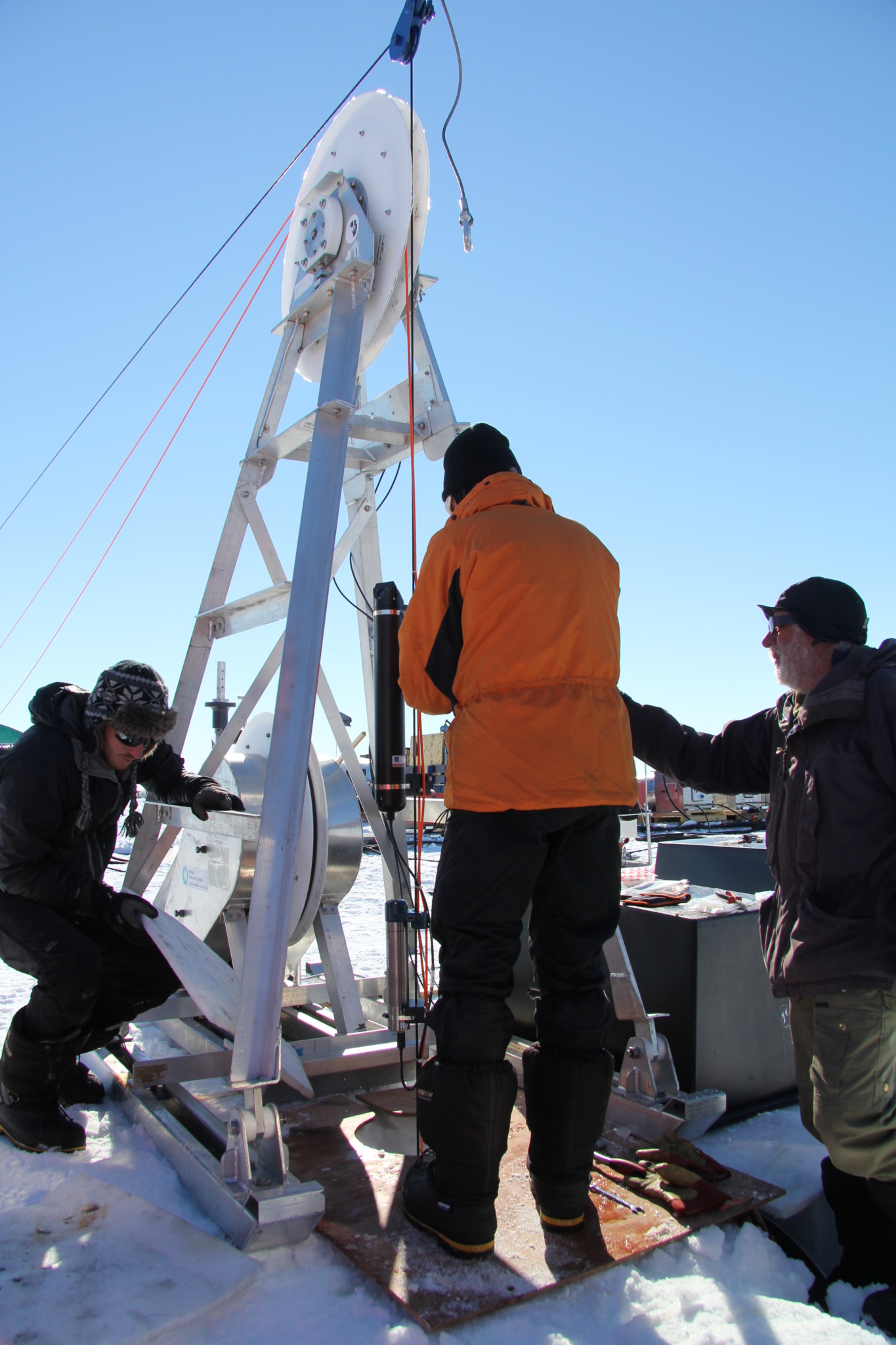 The ice melts at a rate of about 4,000 tonnes per second so it is important for the researchers to move quickly. Photo credit: Keith Makinson

To monitor water masses flowing underneath the ice shelf, the team revisited a site previously drilled in 1998-9, called Site 5. “This site is of key interest because many of the water masses that enter at the ice front are funnelled by this site,” Makinson shared. Setting up a monitoring station allows BAS and Norwegian colleagues to monitor how these different water masses evolve from season to season and sense longer-period signals.

Things have become a little more routine over the years, but it’s still quite a major effort for us from the planning stage to the final execution and the deployment of instruments.Dr. Keith Makinson, British Antarctica Survey

Antarctic research is not an easy undertaking. “Things have become a little more routine over the years, but it’s still quite a major effort for us from the planning stage to the final execution and the deployment of instruments.”

Usually the team plans at least two years in advance of deployment, with drilling equipment and fuel shipped to Antarctica at least a year before the team’s arrival. Flying the team from Rothera Research Station to Site 5 (1500km away), transporting equipment, and drilling fuel requires a staggering amount of fuel. But it’s only one of many complications involved in the remote, frigid conditions.

Equipment failure and frozen pipes are another concern. Work needs to be done quickly, because the access hole drilled to the ocean refreezes at a rate of approximately half a centimetre to two centimeters per hour. “There’s always the constant worry that instruments might freeze to the side wall, losing both the equipment and use of the hole,” Makinson said.

To drill the access hole to the ocean, BAS used a specially-designed hot water drill that melts the ice. The drill pumps water through a series of heaters at a rate of 110 litres per minute. These heaters raise the temperature of the water up to a blistering 88oC. To create the 30cm diameter ocean access hole, the hot water is pumped down a hose to the drilling nozzle. At about 85m below the surface, the team creates a cavity so that water can be pumped back to the surface, reheated and recirculated through the drill, enabling drilling to continue through the ice shelf. 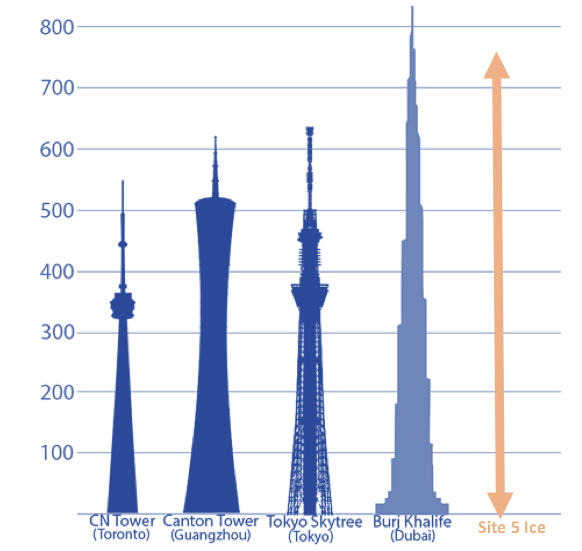 At Site 5, the ice shelf was about 770m thick – a depth greater than the height of the CN Tower (Toronto, 553m) and just less than the height of Burj Khalifa (Dubai, 828m), the tallest freestanding building in the world. With a drilling rate of 1.2 to 1.6m/min, it took about ten hours to reach the ocean.

A special drill brush 1m in diameter is used to enlarge the hole at the base of the ice shelf to prevent snagging of equipment on recovery into the hole. “We’d get started at 8 o’clock in the morning,” Makinson recalled. “Hopefully, the drilling would be finished about twelve hours later with hole through to the ocean, and then we’d spend the night doing CTD profiles, collecting sediment cores, and some water samples.”

“Happiness is probably at the point at which you have the ocean mooring in the water and you’ve got that first communication back to say, ‘Yes, I’m working. I’m sending you data,’” Makinson said.

“Prior to that, it’s actually knowing that you have made the connection to the ocean – collecting that first CTD data, looking at that first profile coming in, because you know that’s data you’ve now got. At the end of the day, no-one can take that data away from you. Even if the instrument does not come back for some reason, you’ve got that data.”

In the morning, BAS lowered oceanographic instruments into the water below the ice surface to measure parameters including temperature, conductivity, depth, water speed and direction, and dissolved oxygen. At Site 5b, one of the three sites drilled, they installed a custom-made RBR thermistor string.

One engineer at RBR recalled the order. “It was the longest thermistor string we’d ever made – 400m long,” he said. The thermistor string had 24 temperature-measuring nodes, each calibrated to an accuracy of 0.005oC. Makinson said, “By having the thermistor cable in particular, you’ve got a high density of measurements through the water column. They’re very good at telling you what proportion of water masses you have.” 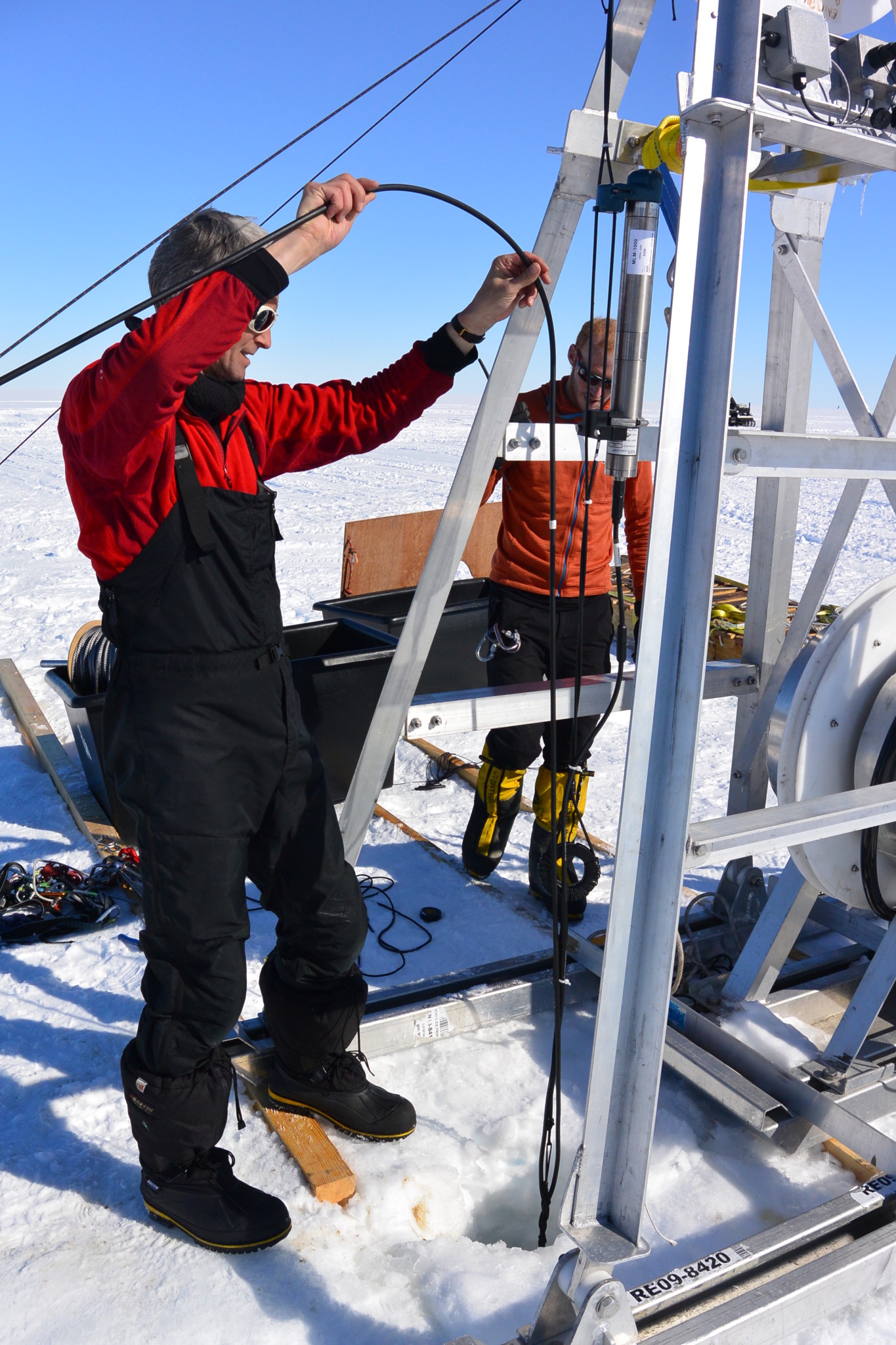 Several different kinds of instruments were used to obtain measurements of salinity below the ice surface, a measurement derived from conductivity (C) and temperature (T) and sometimes plotted against depth (D). These instruments included four high-accuracy RBRduo C.Ts and one RBRconcerto C.T.D. Each instrument along the “mooring line” was installed with an RBR subsurface modem (SSM) that enables data to be communicated from the ocean back to the surface.

In a conventional Mooring Line Modem (MLM) deployment, a head end modem (HEM) is mounted on a buoy to transmit data from instruments below the water’s surface. A special, jacketed steel mooring line anchors the buoy and instruments are mounted on it at desired depths. Magnetic coupling between the SSM and the mooring line at each node allows information to be transmitted via the mooring line to the HEM. To complete the electrical circuit, the plastic jacket is stripped at the ends of the cable and the surrounding water finishes the circuit.

When it comes to researching in Antarctica, though, things are seldom conventional. Because the ice freezes up around the mooring line, the MLM system was customized so that that it did not rely on water to complete the electric circuit. RBR engineers also had to ensure the HEM could withstand the surface air temperatures of Antarctica.

“What temperature does that have to work in?” an RBR engineer remembered asking. The reply? “Well, it’s going to be in a box that warms up to -40oC.”Discussion during design process

A decade of data

With the ice refrozen around the mooring line, the instruments at Site 5 will never be recovered. For engineers, this presents another unusual case: how to maximize the value out of instruments that will never be redeployed. BAS’ objective was to create a monitoring station to be operational for ten years.

“From past experiences, as long as you have the battery power, then it normally works pretty well. The particular battery chemistry of the lithiums that we use has served us well in the past. Because the instruments draw such low current, then [the operational lifespan of the instruments] is almost as long as the battery life,” Makinson explained.

So far, the data has been coming through just fine. Makinson is hopeful that the deployment at Site 5 will become one of a small network of operational moorings beneath the Filchner Ice Shelf, so that researchers can get a broader picture of what’s happening below the ice surface.

To the east, BAS currently has another project funded by the Natural Environment Research Council, which focuses on ice streams flowing into the Filchner Ice Shelf. This season, they were also collaborating with the Alfred Wegener Institute (Germany), successfully drilling another four holes to the south. Next season, there are more plans to drill to the north with teams from Germany and Norway. These future deployments won’t necessarily last ten years, but hopefully they will provide enough data to understand more about waters below the Filchner Ice Shelf.

The project outlined above was supported by the Natural Environment Research Council and the University of Bergen.